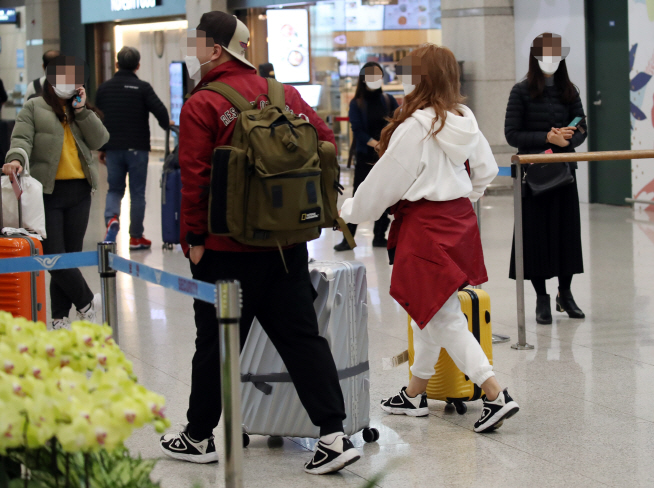 S. Korean honeymooners who were quarantined in Mauritius arrive at Incheon International Airport, west of Seoul, on Feb. 26, 2020. The Indian Ocean island nation decided to isolate South Koreans to prevent the spread of the novel coronavirus. (Yonhap)

SEOUL, Feb. 27 (Korea Bizwire) – South Korea’s tourism industry has taken a big hit from the novel coronavirus due to a reduction in both inbound and outbound tourism, stoking concerns that more industry players will eventually shut down, market watchers said Thursday.

The number of countries imposing entry bans on travelers who recently visited South Korea’s southeastern city of Daegu and the nearby county of Cheongdo is on the rise, following a spike in confirmed COVID-19 cases there.

So far, 17 countries have imposed entry bans, including Japan and Vietnam, and another 22 countries, including the Netherlands, France and Austria, have either raised their travel advisory alert or recommended their nationals avoid nonessential travel to South Korea.

“It is meaningless for us to sell travel products and conduct other business when many countries are banning the entry of South Koreans,” said an official of a local travel agency who asked not to be named.

“It might be just better to close down the company.”

Market watchers said it will take some time to recover the number of inbound travelers after the United States raised its warning level for the country.

Earlier in the day, the U.S. State Department raised its travel advisory for Korea by one notch to Level 3 on a four-level scale, advising its nationals to avoid nonessential travel to South Korea.

The U.S. Centers for Disease Control and Prevention issued the highest type of travel health notice for South Korea, recommending that Americans avoid all nonessential travel to the country due to the spread of the coronavirus.

“The U.S.’s travel alert has huge power, as other countries generally use it as a reference,” said another industry official. “We worry that it will take a longer time for the industry to recover.”

In self-help measures to weather the fallout from the virus, several mid-sized travel agencies adopted unpaid leave for their employees to cut costs and avoid snowballing losses.

A total of 36 travel agencies have reported closure this month, according to government data.

The country reported another daily spike in the number of new infections of COVID-19 on Thursday. A whopping 334 new cases took the nation’s total number of infections to 1,595, with 13 deaths.