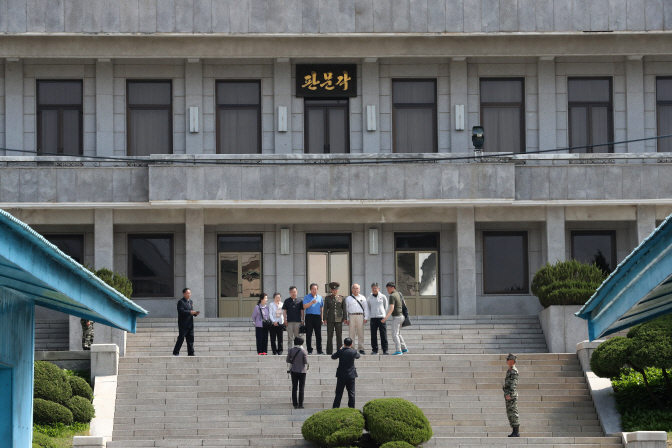 Civilian visitors from South Korea take pictures with the Panmungak pavillion, on the North Korean side, behind them in the Joint Security Area (JSA) on May 1, 2019. (Yonhap)

PANMUNJOM, May 1 (Korea Bizwire) — Civilian tours to the inter-Korean border village of Panmunjom resumed Wednesday, with access expanded to previously off-limits points, including a bridge that President Moon Jae-in and North Korean leader Kim Jong-un walked along during their first summit last year.

The resumption came around six months after the popular tours to the Joint Security Area (JSA) were suspended in October to facilitate joint efforts by South and North Korea to demilitarize the area.

The joint efforts included the removal of mines and went ahead under an agreement to reduce military tensions signed a month earlier.

“I think that what you feel here in Panmunjom is a different vibe. What once was a vibe of tension is now a vibe of peace,” Lt. Col. Sean Morrow, commander of the United Nations Command (UNC) Security Battalion-Joint Security Area, told reporters.

The UNC oversees activities inside the Demilitarized Zone (DMZ) separating the countries.

Vowing to remain firmly committed to the implementation of the inter-Korean military agreement, the commander said he looks “forward to preserving this as a place for dialogue and a place where we can earn trust and build confidence to spread peace around the Korean Peninsula.” 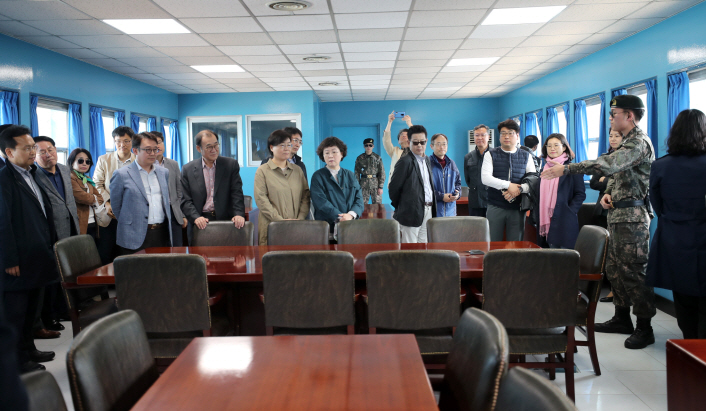 A group of civilian tourists looks around “T2,” or the Military Armistice Commission Conference Room, at the Joint Security Area on May 1, 2019. (Yonhap)

Soldiers on guard duty still stood at attention like statues, ready to control visitors who were eager to get a glimpse of North Korea at the heart of the inter-Korean border. But they no longer carried weapons nor wore bulletproof helmets, telltale signs that tension-reduction measures are firmly in place.

The measures were part of last year’s inter-Korean military agreement signed on the sidelines of September’s third summit between President Moon Jae-in and North Korean leader Kim Jong-un in Pyongyang.

The resumption of tours was timed to mark the anniversary of the first summit between Moon and Kim on April 27 of last year.

The tightly controlled group tours to the truce village had long allowed visitors into certain parts of the zone, such as one of the iconic blue conference buildings that straddle the Military Demarcation Line separating the two sides.

The armistice that halted the 1950-53 Korea War was signed in a building north of the border.

Though the tours still follow a guided format, the visitors now can explore more areas, including the blue-painted Footbridge where Moon and Kim took a stroll and had a private conversation during their first meeting, a scene that symbolized inter-Korean rapprochement.

For some time, however, tourists could be forced to walk only some parts of the bridge or see it from afar, as it has been under construction for about three weeks to guarantee visitors’ safety and facilitate access by the handicapped and those with baby strollers, according to UNC officers.

The pine tree that Moon and Kim planted to commemorate the historic summit is also accessible for visitors.

Also drawing attention are now-defunct guard posts (GPs), which were locked and sealed in accordance with the September military accord. A total of nine South and North Korean GPs inside the JSA were closed.

“We will continue to do our best to give South Koreans as well as visitors from the world a chance to come here and see what is changed under safer circumstances,” an officer noted. 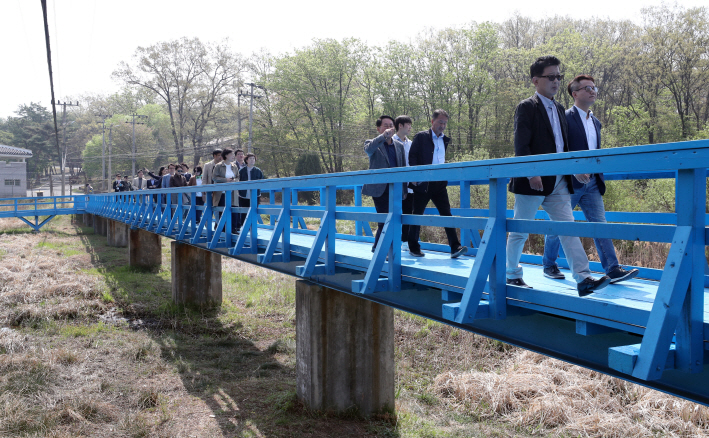 A group of civilian tourists looks around the Joint Security Area on the Footbridge on May 1, 2019. (Yonhap)

On Wednesday, around 340 citizens took part in the tour, including scholars and college students.

A maximum of four groups of up to 90 people each are allowed per day, though the limits are subject to change, officials said.

The two Koreas had originally agreed to restart the tour program after the area’s demilitarization to allow visitors to freely move around both sides of the JSA across the demarcation line running through the zone from 9 a.m. to 5 p.m.

But the plan has been delayed as the two Koreas and the UNC have not reached an agreement on a joint code of conduct for such free movement, and the South has decided to resume tours to only the southern side of the area.

North Korea has reportedly demanded that the UNC be excluded from the management of the JSA.

“Our decision on the partial opening aims to expedite the delayed trilateral talks on the matter and to better prepare for the planned free movement,” defense ministry spokesperson Choi Hyun-soo said.

South Korean citizens can apply to take the tour via the website of the National Intelligence Service, and foreign nationals can join the program through designated tour agencies.