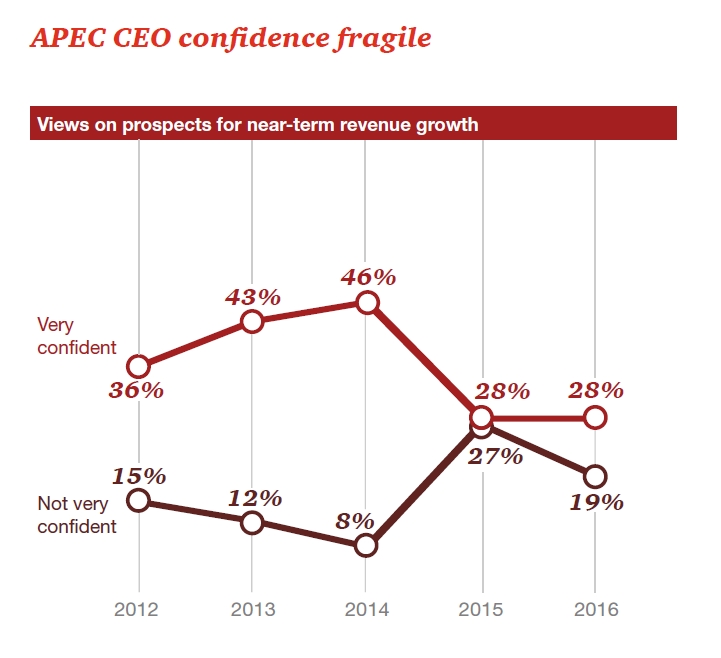 LIMA, Peru, Nov. 17, 2016 (Korea Bizwire) — Over half the businesses in the Asia-Pacific Economic Co-operation’s (APEC) 21 economies (53%) surveyed by PwC this year plan to increase their investments over the next 12 months. This is despite reporting fragile confidence in prospects for revenue growth over the next year and disappointment with pace of progress on free trade in the region.

PwC surveyed over 1,100 business leaders in 21 APEC economies in the run up to the annual APEC CEO Summit in Lima, Peru (17-19 November).

Long term, it is good news for APEC economies, with over two thirds (69%) of the increased investment to stay within APEC economies. China, the US, Singapore and Indonesia are set to attract investment from more CEOs. A regional diversification strategy is also apparent. On average, APEC businesses PwC surveyed invest in seven other economies. Last year, on average, they were investors in six. Almost a third (31%) of businesses plan to focus investment increases in economies outside of APEC.

This year, while more CEOs reported seeing significant progress towards the goal of free trade in the Asia Pacific than did two years ago (22% significant vs 15% in 2014), the majority (53%) in this year’s survey continue to see progress as slow.

“A subdued level of confidence in the business outlook is hardly surprising given geopolitical events this year. What’s critical for the region is that business leaders hold their nerve on investment and innovation.

“For the foreseeable future, APEC business leaders will have to balance the short term economic outlook with investing for the long term. The wider regulatory and tax environment are critical factors in business confidence and investment. Standing still on regulatory conditions is not the way to be competitive in a paradoxically cash-rich but slow-growth world,” said Orlando Marchesi, country senior partner, PwC Peru.

CEOs’ outlook on the pace of GDP growth in China is mixed also. Almost half of APEC CEOs believe China’s GDP in the next three years will grow on average at or below 5-6% a year. Despite this, CEOs are not ignoring the growth potential for their business. Over the next three years business leaders want to build their brand, expand inland and work in partnerships. These are the strategies most common to business leaders, foreign and domestic, with investment in China.

“It’s significant that APEC business leaders look beyond a slowdown to the long term. China is a prime example. Its scale and skills means concerns about its slower economic growth are not enough to put business leaders off investment and expansion. China remains a powerhouse of potential for APEC businesses for new products, and partnerships.”

In a warning sign for the APEC economies’ leaders, CEOs point to continued uncertainty around policy-related costs. Only 14% of all respondents say they’ve become ‘more confident’ that they’re able to forecast compliance costs and tax liabilities than they were at this time last year.

Respondents are more likely to rank the regulatory environment (transparent rules, lack of corruption) as the factor that matters the most in cross border investment decisions within the region.  Moreover, over half (58%) expect the regulatory environment to exert ‘more influence’ on their investment decisions in APEC economies over the next 3-5 years. The findings suggest that business investment is now more likely to flow to APEC economies with the right policy environment and talent pools as well as dynamic growth prospects.

APEC businesses are also turning to wider strategies for revenue growth. CEOs report that digital upgrades throughout the enterprise are helping them target results in operational and cost efficiencies, improving customers’ experience and asset optimization.

Over the next three years, the findings suggest that real-time or near real-time data collection in logistics, equipment, and point of sale devices will become ubiquitous in the region.

One third of respondents expect new sources of revenue as a result of integrating the role of connected devices in their businesses.

“APEC’s manufacturing and resource rich economies have the potential to show how data analytics can be used to inform business strategy, using information from production, partners, logistics, customers, and the shop floor. The power of digital data is not in how much of it you gather, but how you action the information it gives you,” added Orlando Marchesi.

About PwC
At PwC, our purpose is to build trust in society and solve important problems. We’re a network of firms in 157 countries with more than 223,000 people who are committed to delivering quality in assurance, advisory and tax services. Find out more and tell us what matters to you by visiting us at www.pwc.com.