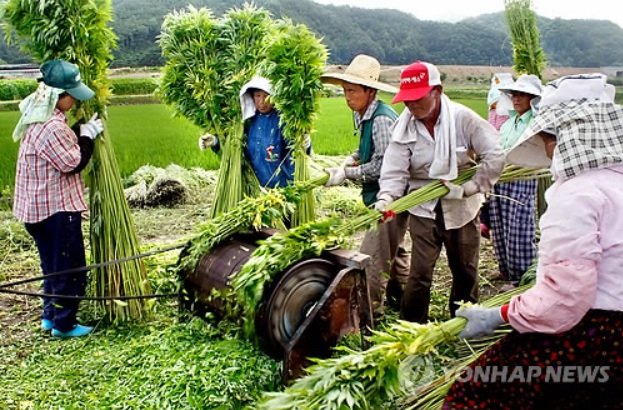 When the harvest season comes, the city government sends officials to supervise the process. After harvesting the hemp, farmers burn unused leaves and peeled stalks under the watchful eyes of the supervisors. (image: Yonhap)

SEOUL, June 29 (Korea Bizwire) – In Andong, a farming city in North Gyeongsang Province, there are several farms openly growing hemp, a high-growing variety of cannabis. Of course, they are not growing the plant to make marijuana, which is banned in Korea.

The hemp grown in Andong is used to make hemp fabric, one of the most precious products sent to kings during the Joseon dynasty. Andong produces some of Korea’s best hemp fabrics with its sandy soil, which is good for hemp growing, as well as an abundance of traditional weaving skill.

Currently, 12 farms are growing hemp on 1 hectare of land. They sew hemp seeds in late March and begin harvesting the crop in late June.

As they mainly use hemp stalks as fiber for making hemp clothes, many are often curious about what happens to the unused hemp leaves.

When the harvest season comes, the city government sends officials to supervise the process. After harvesting the hemp, farmers burn unused leaves and peeled stalks under the watchful eyes of the supervisors.

The hemp fabric produced in Andong, andongpo, was renowned for its high-quality during the Silla Dynasty (57 B.C.-A.D. 935), when it was used to make costumes for “hwarang,” or flowering knights, an elite group of male youth. During the Joseon Dynasty (1392-1910), the fabric was used to make summer wear for commoners and even to send to kings.

In Korea, hemp was one of four popular traditional textile fibers, along with cotton, ramie and silk. However, the tradition of making hemp fabric is disappearing, as it requires complicated skills that are hard to obtain, and cheap hemp fabric from China is dominating the market.