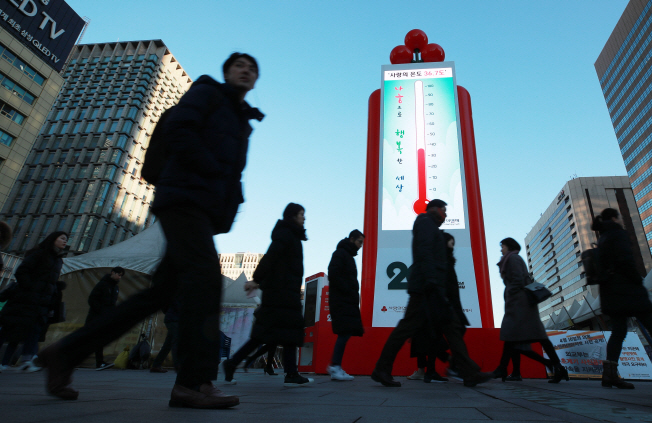 A thermometer installed in central Seoul representing the amount of donations raised by the Community Chest of Korea. (Yonhap)

SEOUL, Dec. 28 (Korea Bizwire) — South Koreans are familiar with the huge thermometer-shaped objects set up by the Community Chest of Korea (CCK) across the country every winter, which represent the amount of donations raised from its annual charity drive, with the target set at 100 degrees.

The project led by the group, which distributes donations to smaller nongovernmental organizations, is considered the biggest fundraising movement in the country. South Korean businessmen and politicians wear a badge named “fruit of love” over the year-end season to show off their participation.

The charity group, however, expressed concern that it may not achieve the target for this year as well, as the combined volume of donations collected as of this week is only equal to 82 percent of the amount collected for the same period last year. 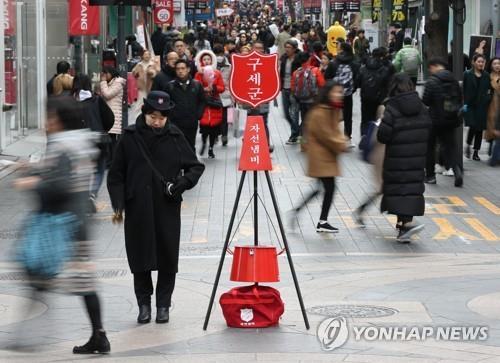 “There are a number of factors (that are weighing down donations), including the worsening economic conditions. The public also became more negative towards charities due to some organizations’ poor management of donations,” a spokesman of the CCK told Yonhap News Agency.

The number of new members of the organization’s Honor Society, which is a group of people who have donated more than 100 million won to the CCK, also has declined from a year earlier for the first time since its launch in 2007. The society had 422 new members in 2016, but the figure decreased to 338 last year. As of November, the society only had 186 more new members this year.

Other major fundraising projects are recently facing hurdles in South Korea as well.

The Salvation Army claims the amount of donations gathered through the Red Kettle campaign fell a whopping 15 percent from Nov. 30 to Dec. 19 at 2.7 billion won, compared with 3.2 billion won collected over the same period a year earlier. The Christian organization installed their famous red-colored kettles in 440 locations across South Korea this year.

Statistics show that South Koreans are becoming less inclined to make donations, with many of them citing financial reasons.

According to the latest data compiled by Statistics Korea, 26.7 percent of South Koreans said they have made donations in the previous one-year period in 2017, down from 29.9 percent posted in 2015. The figure had stood at 36.4 percent in 2011.

The findings showed that 57.3 percent of the respondents said they could not afford to donate money.

“I am concerned that the challenging economic conditions, such as the worsening employment, could weigh on the spirit of donations and sharing,” Prime Minister Lee Nak-yeon said earlier this month, urging the organization to utilize social media to encourage younger generations to get involved in the good cause. 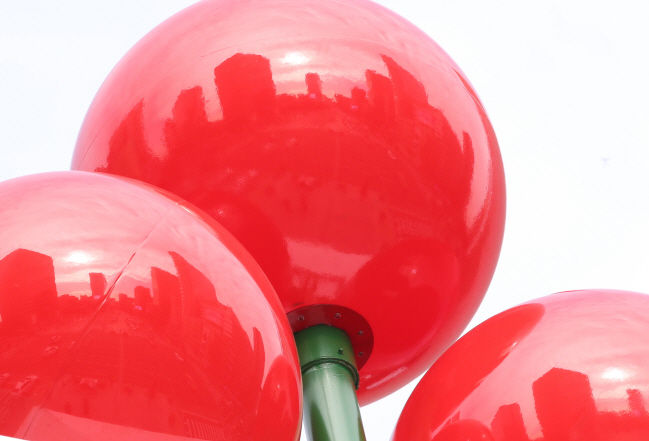 “Fruit of love” on the top of a thermometer installed by the Community Chest of Korea (CCK) in central Seoul that represents the amount of donations raised from its annual charity project. (Yonhap)

Some South Koreans, however, said the economic situation is not the only hurdle in promoting donations in the country.

“Although I want to join such charity drives, I am concerned whether my donation is actually being used to help people in need or is wrongfully spent for other purposes,” said Yim Keon-woo, a university student living in Seoul. “I often watch news reports on organizations embezzling money raised.”

Such concerns especially rose to the surface after a now-defunct organization, New Hope Seed, recently raised 12.8 billion won, only to use 200 million won for actual charity projects and squandering the rest for personal purposes. The organization’s chief was slapped with a 12-year jail term earlier this month.

Another incident surrounding Lee Young-hak, who choked a 14-year-old friend of his ill daughter to death after sexually molesting her, came as a shock to the public as he lived a luxurious life off government allowances and donations he received from those who took pity on his sick daughter.

Han Jeong-un, an office worker from Suwon, southern Seoul, says she has been making donations for many years but only to organizations that actively and clearly provide information on how the money is being used.

“Charities should be able to deliver detailed information to donors,” Han said. “In the case of many big-name organizations, donors have to visit their websites, search for accounting books, only to find outdated or ambiguous data. We don’t want to just see a thermometer showing people making donations but what comes afterwards.” 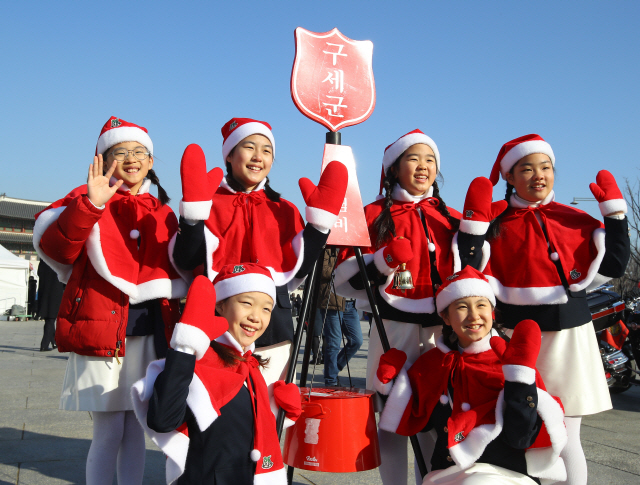 Children pose for a photo with the Salvation Army’s donation kettle in central Seoul in this file photo taken Nov. 30, 2018. (Yonhap)

Accordingly, experts say it is important to assure the public that donations are used properly, rather than to persuade them with ambiguous causes. Such transparency will also help in overcoming bias that religious-led charities misuse donations for missionary work.

“Our religious and charity organizations are separated. Money raised from the charity body cannot be spent for the church,” an official from the Korea Territory of the Salvation Army said, claiming many people misunderstand its projects. “Our donations are being supervised by the Ministry of the Interior and Safety.”

South Korea’s Ministry of the Interior and Safety said Sunday it will get charities to post their accounting books on their websites for 30 days, which is higher than the current regulation of 14 days.

The new order will also obligate charities to provide information on donations, including where the money was spent, to donors whenever there are requests.

Meanwhile, numerous anonymous people have made generous donations this year, a good indicator that the spirit of giving perseveres.

Earlier this month, an unknown person delivered an envelope with 55.3 million won to an office of CCK in South Gyeongsang Province. The envelope included a letter that asked the organization to use the money to provide medical treatment for people in need.

The office received a separate letter in January — which had the same handwriting style — which delivered 260 million won.

“Although the amount of donations collected by the branch has decreased from last year, there are still anonymous contributors delivering donations this year,” a CCK official said.

The CCK said it is preparing a wider range of platforms to invite more people to join the campaign. These include allowing people to make contributions through transportation cards and smartphones.