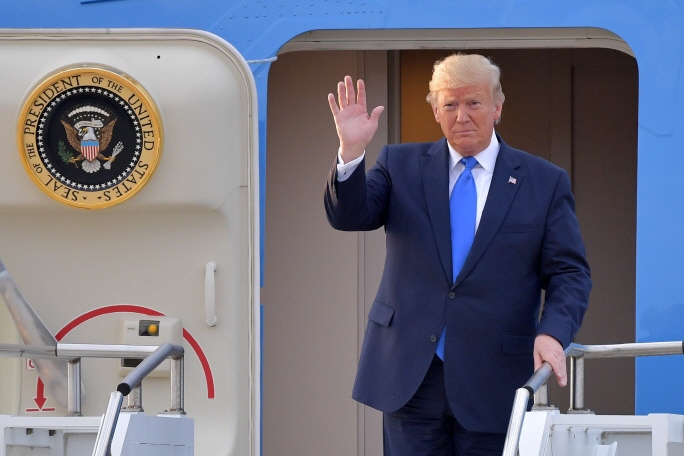 U.S. President Donald Trump waves after arriving at South Korea’s Osan Air Base on June 29, 2019, for a two-day visit that will include a summit with South Korean President Moon Jae-in. (Yonhap)

During the gathering, the U.S. president cheered the latest revision of the free trade agreement between the two countries but claimed that there should be more efforts to reduce what he calls “imbalanced” trade.

“South Korea has made great progress in reducing our trade imbalance and unleashing new prosperity for both of our countries,” Trump said in his speech delivered to the business leaders.

At the request of Washington, the two countries began last year to negotiate ways to revise the original deal, known as the KORUS FTA that went into effect in 2012.

Seoul lowered barriers for U.S. automobiles under the revised free trade deal that was implemented this year.

“Our upgraded agreement will benefit workers in both the United States and South Korea,” he added, claiming South Korean firms will also have more access to U.S. automobiles, agricultural products and medicines.

Under the new deal, Washington was able to extend a tariff of 25 percent on Korean pickup trucks by another 20 years to 2041.

South Korea also doubled the 25,000-vehicle unit threshold for U.S. car imports that do not have to comply with domestic industry regulations.

“We must remain vigilant and ensure that we keep moving forward to a more balanced trade relationship and further reduce the trade deficit,” Trump said.

The combined amount of trade between South Korea and the United States, meanwhile, reached an all-time high level in 2018 at US$131.6 billion, up 10.3 percent on-year, according to the Ministry of Trade, Industry and Energy.

Trump also requested South Korean firms to expand their investment in the United States, claiming Washington will offer an optimistic business environment for them.

“There’s never been a better time to invest or do business and create jobs in America,” Trump said, claiming Washington has made efforts to cut taxes and eliminate regulations to pave the way for companies.

“Our countries also enjoyed a thriving investment relationship. Since 2017, Korean investment in the United States has expanded by billions and billions of dollars,” Trump said, citing several investments made by South Korea firms in the world’s top economy.

The examples included Lotte’s completion of an ethylene plant in Louisiana in a project estimated at around $3 billion, along with Korean Air’s decision to purchase 30 B787 passenger jets from Boeing.

Trump expressed gratitude to individual business leaders during the speech, saying he appreciates the efforts made by South Korean firms.

“I really appreciate the very large investment in our country, including the companies represented in the room,” Trump said, claiming the U.S. people should also be aware of brand new jobs created by such projects.

Trump shared his experiences of being fascinated about the buildings of South Korean conglomerates.

“I happen to fly over a building. It was one of the largest buildings I have ever seen. Samsung. It was a manufacturing building,” Trump said, claiming he was interested in finding out more details about the building.

The U.S. president said he loved the design of Lotte Tower as well, which is currently South Korea’s tallest building.

Trump added all of the recent economic ties between Seoul and Washington are just beginning, claiming they will maintain a close relationship down the road.

“President Moon has treated me and our country with a great respect, to which I appreciate, because we are doing a lot for you,” Trump said, claiming that Washington has been making “astronomical” expenditures here, including stationing U.S. troops.

Trump also expressed hope over the improvement in the U.S. relationship with North Korea, claiming he is “the opposite of a warmonger.”

“A lot of bad things could have happened. We took a tough stand and so did (Kim Jong-un), and then all of sudden, we came together,” Trump said. “Let’s see what happens. Nothing’s final, got a long way to go.”

While industry watchers earlier expected that Trump may make comments about Washington’s ban on China’s telecom giant Huawei Technologies Co., he did not make related statements during the speech, apparently as the world’s top two economies agreed to negotiate on the recent trade rows at last week’s Group of 20 summit in Japan.

South Korean firms, meanwhile, may come up with detailed plans to expand their investment in the U.S. in the near future, industry watchers added.

“We are reviewing several things (on expanding investment in the U.S.),” Shin told reporters, responding to Trump’s call for South Korean firms to expand their investment.

Another official from Lotte said the company is especially interested in the hotel, resort and tourism segments.

CJ Group also said it plans to make further investments in the U.S. in the foodstuff and retail industries.