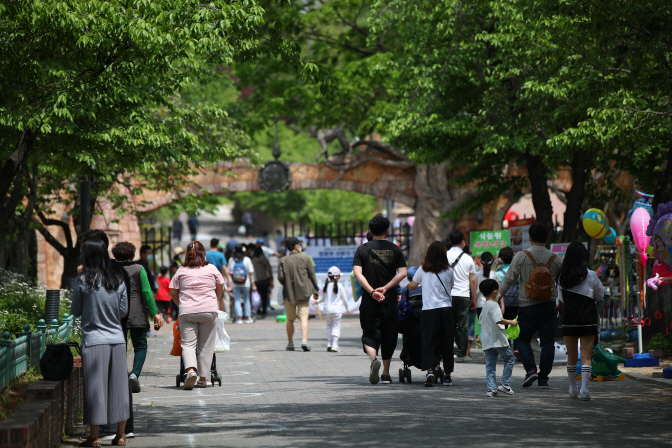 This photo, taken on May 3, 2020, shows citizens at a zoo inside Children’s Grand Park in Seoul. (Yonhap)

SEOUL, Sept. 16 (Korea Bizwire) — A recent survey showed that almost two thirds of unmarried couples who live together without being married are satisfied with the relationship with their partner.

The state-funded Korea Women’s Development Institute conducted a survey of 3,007 persons between 19 and 69 years of age living as an unmarried couple, or who have had such an experience.

Among the respondents, 63 percent said that they were satisfied with the relationship with their unmarried partner.

Among the unmarried couples, 88.4 percent (multiple answers possible) replied that the bright spot of the living together without being married was the sense of emotional bonding and stability.

Another 84.9 percent said that living together without being married is helpful in making a decision on whether or not to get married since it enables them to check their partner’s habits and lifestyle before marriage.

At 82.8 percent, the majority of respondents noted that living together without being married helps is more cost efficient as it allows a couple to share household expenses.

Among the positive aspects, the one with the biggest gender gap was ‘no burden of childbirth,’ with 18.9 percent of men viewing it positively, much lower than the 35.3 percent reported for women.

In response to a question asking why they chose to not to get married before living together, the largest share of those in their 20s (38.6 percent) said that they were too young to get married.

Another 43.8 percent of those aged over 60 said that they were too old to get married.

2 thoughts on “Two-thirds of Unmarried Couples Feel Satisfaction in Their Relationship: Survey”