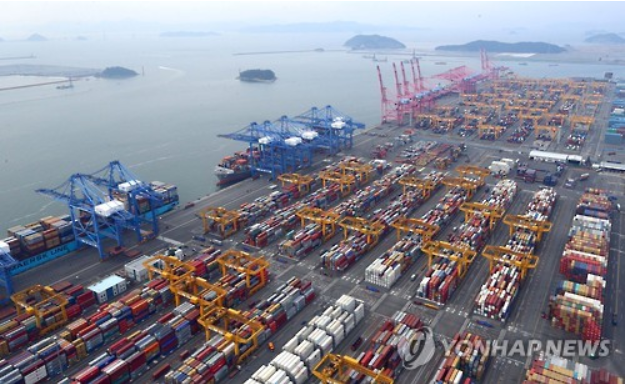 In 2016 alone South Korea posted a $14.09 billion trade deficit with the United States in the service sector, according to an earlier report from the Korea International Trade Association (KITA). The 2016 tally marks a 28.4 percent spike from a $10.97 billion deficit in 2011. (Image courtesy of Yonhap)

SEOUL, March 13 (Korea Bizwire) – The United States has benefited even more than South Korea has from the countries’ free trade agreement (FTA), experts here said Monday, noting a demand to renegotiate the terms of the bilateral pact by Washington may well work to serve Seoul’s interest.

The Korea-U.S. FTA, also known as the KORUS FTA, went into effect five years ago this week.

Washington has yet to file an official demand for the renegotiation of the open trade pact, but is expected to do so under the new Donald Trump administration, which has labeled the bilateral FTA, along with all other similar deals the U.S. has entered in the past, as “destroyers” of local jobs.

Still, many here note the U.S. has at least equally benefited from the KORUS FTA, if not more than South Korea.

The U.S. argument for renegotiation of the Korea-U.S. FTA is, and is solely, based on the fact that the United States continues to post a trade deficit with South Korea even under the deal.

The U.S. Trade Representative (USTR) earlier called for a major review of the Korea-U.S. FTA, accusing it of causing a “dramatic increase” in the country’s trade deficit.

“The largest trade deal implemented during the Obama administration — our free trade agreement with South Korea — has coincided with a dramatic increase in our trade deficit with that country,” the USTR said in Trump’s 2017 Trade Policy Agenda released last week.

The Seoul government acknowledges a rise in South Korea’s trade surplus with the U.S.

The figures, however, only deal with products which make up one part of the FTA that also governs and promotes bilateral exchanges in investment and the service sector.

In 2016 alone South Korea posted a $14.09 billion trade deficit with the United States in the service sector, according to an earlier report from the Korea International Trade Association (KITA). The 2016 tally marks a 28.4 percent spike from a $10.97 billion deficit in 2011.

“Up until now, I have never heard of anyone or any country trying to evaluate the outcome of an FTA based solely on changes in its trade balance,” said Jung Hye-sun, a researcher from KITA’s Institute for International Trade.

“The Korea-U.S. FTA is a comprehensive treaty that deals not only with products, but also service and investment. A claim only based on the exchange of products cannot but be a far-fetched (or false) argument,” she added.

Chung insisted shipments of products too must be viewed in terms of their market proportion.

For instance, South Korea exported $66.4 billion worth of products to the United States last year, accounting for 3.19 percent of the United States’ overall imports in the same year and marking a 0.62 percentage point increase from five years earlier.

U.S. products, on the other hand, enjoyed a combined market share of 10.64 percent in South Korea’s overall import market last year, spiking 2.14 percentage points over the cited period, according to KITA.

Also in terms of investment, the United States again emerges as a bigger winner.

South Korea’s new foreign direct investment to the U.S. reached $18 billion in 2016, more than doubling from $7.01 billion in 2012, according to the Seoul government.

Fresh U.S. investment to South Korea, on the other hand, came to only $3.88 billion last year, plunging 29.3 percent from a year earlier and growing only slightly from $3.67 billion in 2012.

“New investment is what creates new jobs, and in that sense, South Korean companies and their investment in the U.S. are helping to create far more jobs in the U.S. than U.S. investments in South Korea,” a government official said, speaking on condition of anonymity.

“Therefore, calling the Korea-U.S. FTA a destroyer of U.S. jobs is not only incorrect, but is a lie.”