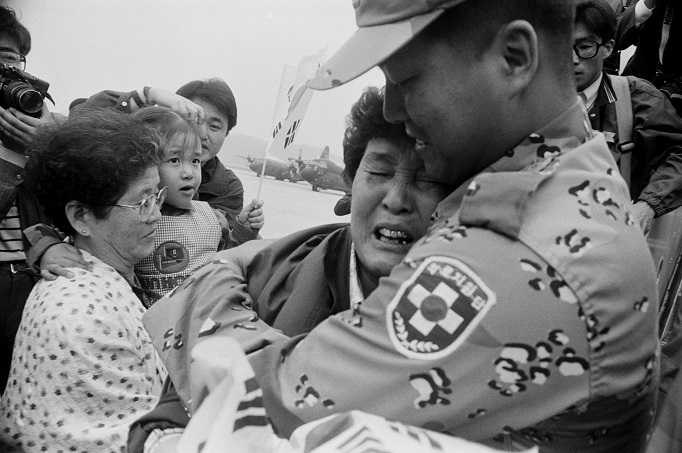 This file photo shows a solider reuniting with his family member on April 1, 1991, upon return from his participation in the Gulf War. (Yonhap)

SEOUL, March 29 (Korea Bizwire) — U.S. officials put diplomatic pressure on South Korea to contribute to a U.S.-led military coalition to fight in the 1990-91 Gulf War, suggesting that its role might affect the future course of bilateral ties, a declassified diplomatic dossier showed Monday.

The pressure came when Ban Ki-moon, then director general for American affairs at Seoul’s foreign ministry, met with Carl Ford, then deputy assistant secretary of defense, during his visit to Washington in December in 1990, shortly before the coalition launched Operation Desert Storm against Iraq.

During their talks, Ford touched on the issue of South Korea sending military medical personnel to Saudi Arabia and stressed the need for Seoul to push for the deployment more actively, according to the declassified document.

Ford also said that should the U.S. military suffer any causalities, the American public would pay attention to the level of support from friendly nations — remarks that apparently added pressure on Seoul to contribute to the coalition.

The dossier also showed that Richard Solomon, then assistant secretary of state for East Asian and Pacific affairs, said that how South Korea — beneficiary of U.S.’ support during the 1950-53 Korean War — would support the U.S during the Gulf War would affect public opinion in America.

In response to the calls, Ban said that South Korea was providing the maximum support “within its capacity” while explaining its efforts, including US$50 million that the Seoul government secured by drawing up a supplementary budget.

The dossier also included a document detailing difficulties setting up the first summit between South Korea and the then Soviet Union in San Francisco on June 4, 1990, that led to the opening of bilateral diplomatic ties months later.

Seoul and Moscow secretly pushed for the summit between then South Korean President Roh Tae-woo and Mikhail Gorbachev, then leader of the Soviet Union, as Pyongyang responded sensitively to the two sides getting closer, the dossier showed.

Particularly, the Soviet side asked Seoul not to excessively “play up” the summit due to Pyongyang’s sensitive reactions.

On Monday, the foreign ministry declassified a 330,000-page dossier. The 30-year-old documents have been made public at the ministry’s diplomatic archives. Related books will be distributed to major research centers and libraries.