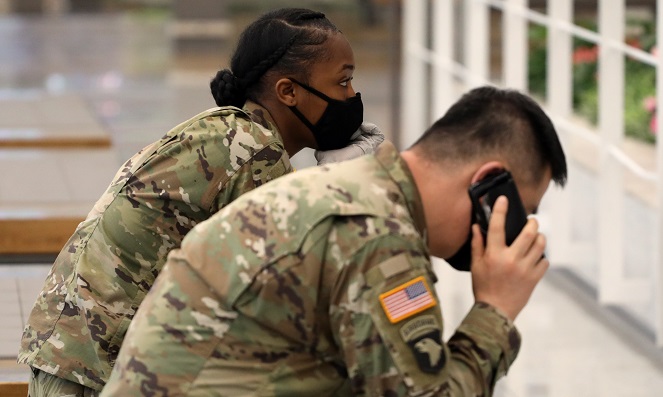 SEOUL, Aug. 30 (Korea Bizwire) — The U.S. Department of Army on Sunday began to require all American soldiers, families and other related civilians to have a negative test result for the new coronavirus prior to their departure for South Korea, officials said.

The measure comes as the U.S. Forces Korea (USFK) has reported a large number of COVID-19 patients among new arrivals from their home country.

As of Friday, USFK reported 168 virus patients among its population, and 144 of them, or 85.7 percent, tested positive upon arrival or during their mandatory two-week quarantine period after arrival.

“All Army personnel will have to produce a negative COVID test before departing the U.S. This negative test result should be as close as possible to the departure date,” Lt. Col. Michael Nicholson of the Eighth Army said in a statement sent to Yonhap News Agency.

The U.S. military initially declared that all U.S. Army soldiers, civilians and family members conducting official travel outside the U.S. will come under a 14-day movement restriction and submit a negative virus test prior to their departure.

“Given that the Republic of Korea already requires a mandatory 14-day quarantine upon arrival, the Department of the Army amended its previous guidance for personnel going to Korea in order to eliminate the double requirement on our personnel,” Nicholson said.

All USFK-affiliated individuals arriving in South Korea are required to undergo a virus test and are quarantined for 14 days. Medical personnel administer a second test prior to their release.

“Newly arrived personnel do not interact with the local Korean communities until they are cleared and released from their mandatory 14-day quarantine,” the military added.