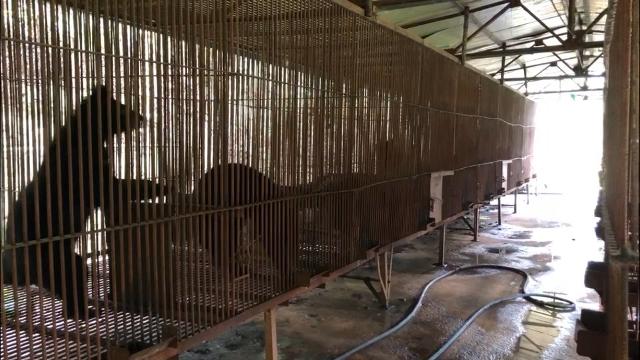 The bears are sent to foreign sanctuaries because there are no similar places in South Korea for the bears to go. (image: KAWA)

SEOUL, July 2 (Korea Bizwire) — South Korean bears locked up for gall extraction will be transferred to a sanctuary in the United States.

The Korean Animal Welfare Association (KAWA), an animal protection agency, held a press conference at Gwanghwamun Square in central Seoul on Wednesday announcing that an agreement had been reached with bear farms to rescue 22 bears and shut down all business operations.

The bears will be transferred to The Wild Animal Sanctuary (TWAS) located in the U.S. state of Colorado next year. TWAS is where KAWA sent a family of lions locked up inside a concealed concrete space for three years.

The rescued bears are Asiatic black bears, an endangered species listed in Appendix I of the Convention on International Trade in Endangered Species of Wild Fauna and Flora (CITES).

The bears will continue to stay at the farms until they are sent to the United States.

The bears are sent to foreign sanctuaries because there are no similar places in South Korea for the bears to go.

Currently, the South Korean government is taking a negligent stance on the bears, arguing that the state cannot interfere with the matters of private businesses that breed bears for profit.

The government neutered 967 breeding bears between 2014 and 2016, reducing a population that once reached as much as 1,400. Now, the government has no funding set aside to continue the program.

“The government should encourage bear farms to shut down and build sanctuaries in order to fundamentally resolve the issue,” said Kim Su-jin, a KAWA activist.

The recently rescued 22 bears are a mere 5 percent of all 431 bears still living in captivity.

While bear farms are slowly being dispersed, there are still hundreds of bears living under poor conditions in South Korea.