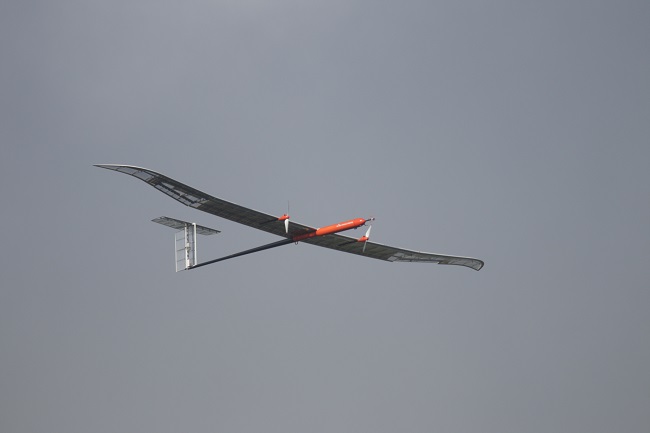 The EAV-3 is a solar-powered UAV developed by the Korea Aerospace Research Institute and powered by an LG Chem Li-S battery. The flight test of the EAV-3 was carried out in the stratosphere on Aug. 30.

LG Chem became the first company in South Korea to fly a UAV using next-generation Li-S battery into the stratosphere.

The EAV-3 is a small aerial vehicle that can fly for a long time in the stratosphere at an altitude of more than 12 kilometers above sea level simply by using solar energy and in tandem with a battery.

The EAV-3’s wings are 20 meters long, while the fuselage has a length of 9 meters.

During the flight test, the EAV-3 succeeded in flying at an altitude of 22 kilometers above sea level, setting a new domestic flight record for altitude among UAVs.

LG Chem said that while flying for a total of 13 hours, the EAV-3 was able to stably operate for seven hours in the stratosphere at an altitude of between 12 and 22 kilometers above sea level. General carriers are typically unable to fly at that height.

Made of lightweight material, the Li-S battery uses a sulfur-carbon composite for the anode and lithium metal for the cathode.

Compared to existing lithium-ion (Li-ion) batteries, Li-S batteries are lighter and have superior price competitiveness since their energy density per weight is more than 1.5 times higher than that of lithium-ion batteries.

Against this backdrop, countries around the world are competing fiercely to get the upper hand in the development of these types of batteries.