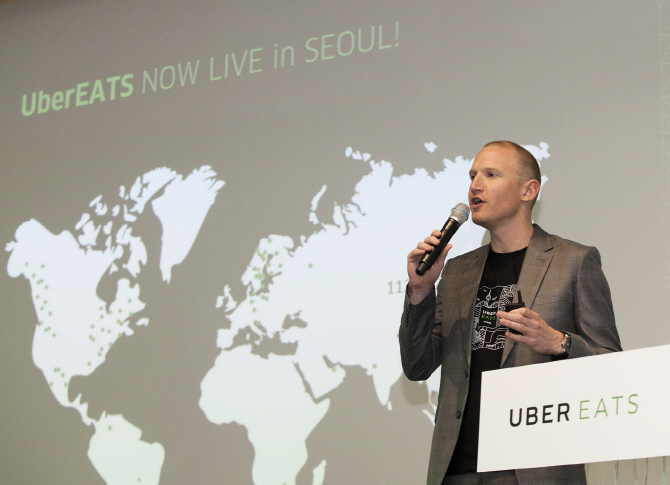 Allen Penn, Asia Pacific’s head of UberEATS, talks to the Korean press at the press conference held in Seoul on Aug. 10, 2017. (image: Yonhap)

The mobile application UberEATS allows users to select food from registered restaurants and deliver the dishes by its delivery partners, its local unit Uber Korea said.

“Food delivery is very advanced in Korea,” said Allen Penn, Asia Pacific’s head of UberEATS, during a press conference held in Seoul. “With that said, we still feel like we are at the very beginning of the food delivery trend. If you look at the types of technology that Uber is beginning to introduce — the range of cuisines and price points that it opens up — you can see how that brings new consumers into the market.”

UberEATS service is available in the affluent Gangnam areas and the popular foreigner district of Itaewon in Seoul seven days a week from 11 a.m. to 10 p.m. in partnership with over 200 restaurants, Uber Korea said. It said plans are under way to gradually expand the service to the rest of the city.

Anyone can sign up to become a delivery partner with UberEATS, using the transportation of their choice, such as bicycles and motorcycles, the U.S. ride-hailing company said.

UberEATS is expected to heat up competition in the country’s 12 trillion-won (US$11 billion) food delivery app market that’s growing rapidly on the back of rising single households and double-income couples.

Whether the new app will successfully take root in the local market dominated by homegrown apps, such as Baedal Minjok and Yogiyo, is yet to be seen.

Baedal Minjok, run by local startup Woowa Brothers, raked in 84.8 billion won in revenue last year, up 71 percent from a year earlier, according to data by the Financial Supervisory Service (FSS).

The San Francisco-based company has been investing in the food delivery business after it launched a pilot service in Los Angeles in 2014. The service is currently available in 112 cities in 28 countries.