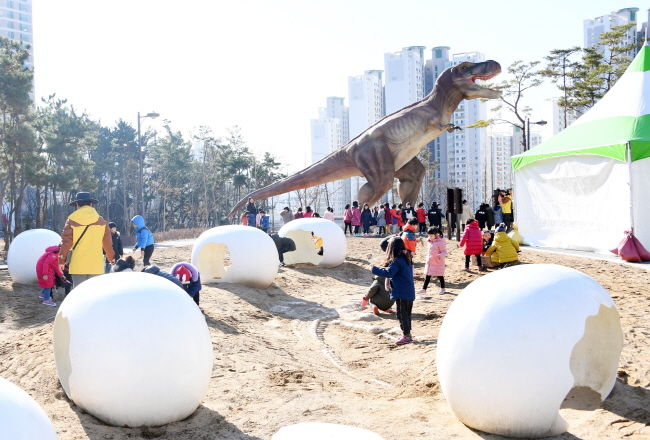 The Korea Land and Housing Corp. invested 3.14 billion won (US$2.78 million) for the construction of the park that surrounds a dinosaur footprint, a cultural asset designated by the city of Ulsan.

Four life-size models of dinosaurs including Tyrannosaurus, Brachiosaurus, Stegosaurus, and Spinosaurus were installed in the park. They are designed to cry or move their head, mouth, and tail.

Sensors are attached to these dinosaurs so that they can operate only between 10 a.m. and 6 p.m. daily to prevent any disturbances.

The park houses excavation chambers where children can experience digging up dinosaur fossils themselves, as well as photo zones with dinosaur eggs, dinosaur statues with stories about dinosaur footprints, and dinosaur-shaped doors and benches.

The park also has a 19-car parking lot and temporary washrooms, which will be replaced by a permanent facility next year.

“Families can come and rest as they learn and enjoy unique experiences.”

The fossils are known to be approximately 100 million years old.