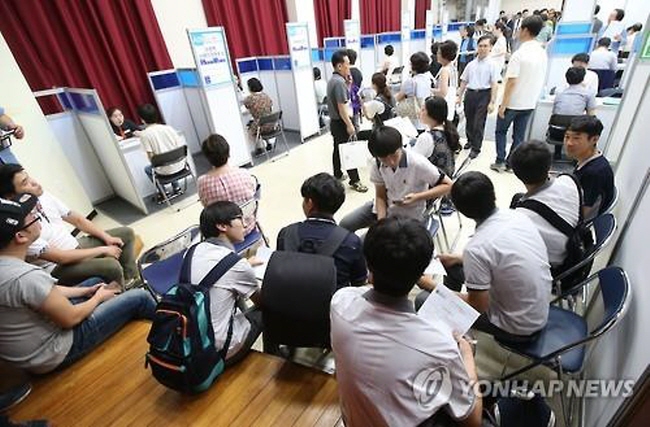 There were 410,000 unemployed people aged between 20 and 29 in the January-June period, the highest level since relevant data was compiled by Statistics Korea. The previous record was 402,500 in the first half of 2000.

But economists point out that most of those jobs were temporary positions in which the contract was set to expire within one or two years.

As of May, 34.8 percent of the jobs that people aged between 15 and 29 got were temporary positions that did not guarantee them continuous employment.

“The unemployed numbers tend to spike when job growth mostly relies on temporary or contract positions. It happens when the number of jobs grows in contrast with slow economic growth,” said Kim Kwang-seok, a researcher at Hyundai Economic Research Institute.

“(The government) should invigorate the service sector to adjust the economy’s structure in which employment will naturally be generated,” said Kim.

The government is set to unveil comprehensive measures to boost the employment of young people as they face tougher job searches amid an extended retirement age for those already in the workforce.’