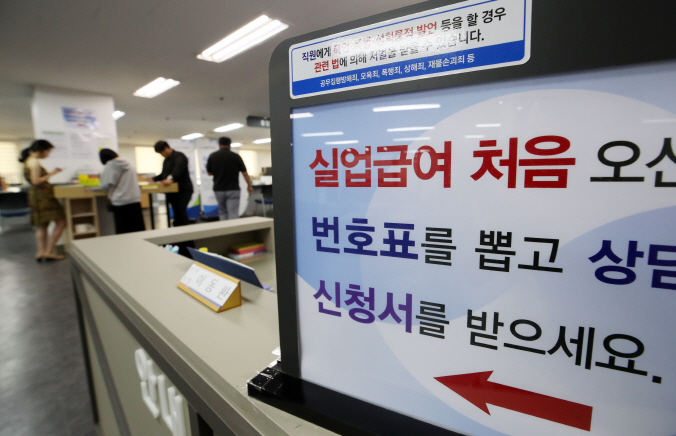 People applying for unemployment benefits at a labor office. (Yonhap)

SEOUL, April 13 (Korea Bizwire) – The amount of state allowances paid to those unemployed or seeking jobs soared to a record high of nearly 900 billion won (US$738 million) in March, data showed Monday, due largely to the negative economic impact from the coronavirus outbreak.

According to the Ministry of Employment and Labor, the government paid 898.2 billion won in allowances to those struggling to find jobs last month, which marked an increase of 40.4 percent from 639.7 billion won paid in the same month last year.

Self-employed people, workers in special employment and freelancers, who are not covered by the employment insurance, are not eligible for the unemployment allowances.

The ministry said about 156,000 people applied for job seekers’ allowances last month, up 24.8 percent from a year ago, suggesting that most of them appear to have been affected by the spread of COVID-19.

According to the ministry, 35,000 applicants for the job seekers’ benefits were those who lost jobs in the health and welfare sector, followed by 19,000 in the manufacturing sector, 16,000 in the construction sector, 15,000 in the wholesale and retail sectors and another 15,000 in the educational service sector.