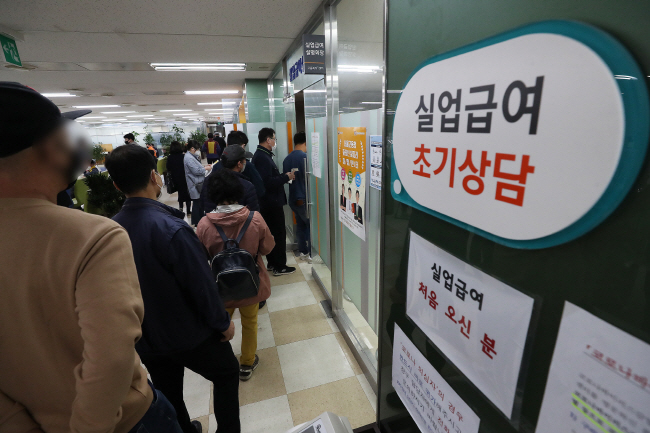 This file photo shows people lining up at a labor office in Seoul to receive counseling on applying for unemployment benefits. (Yonhap)

SEOUL, Sept. 8 (Korea Bizwire) — The amount paid out in jobless benefits fell slightly in August from the previous month while the number of employment insurance subscribers increased at a faster rate, data showed Monday.

The signs of improvement in the labor market, however, are unlikely to persist this month as the nation tightened social distancing again to curb spikes in coronavirus infections, the Ministry of Employment and Labor said.

The state jobless aid distributed in August came to 1.097 trillion won (US$923 million), up 51.2 percent from 725.6 billion won in the same month of 2019, according to statistics from the ministry.

The amount fell from a record high of 1.189 trillion won set in July and exceeded 1 trillion for the fourth consecutive month.

The number of new applicants for unemployment benefits was 90,000, the lowest since last November, when the number was 86,000. The number spiked to 156,000 in March but has been declining since April.

The ministry also announced that the country had just over 14 million employment insurance subscribers, up 262,000, or 1.9 percent, from the same month last year.

It is the first time that the number has exceeded 14 million.

The increase was led by the service sector, in which the subscriber number rose by 3.4 percent on-year to 9.647 million, while the number in the manufacturing sector declined 1.8 percent to 3.512 million.

The ministry is pessimistic with regard to this month’s job market.

“With coronavirus spreading again in mid-August, employment conditions are getting much worse. The government is taking this trend very seriously,” Hwang Bo-kook, a ministry official, said.