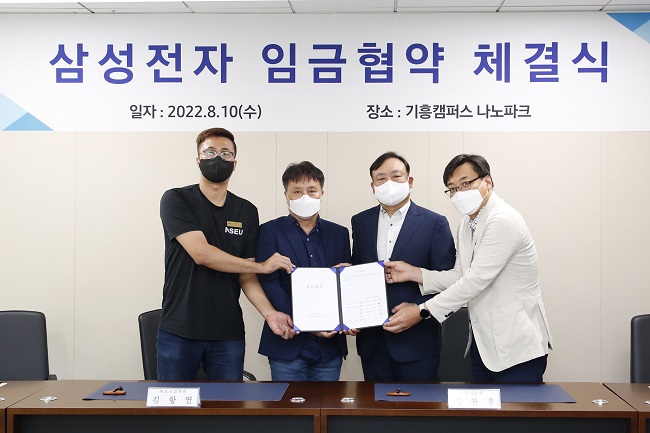 Samsung Electronics Co. holds a signing ceremony for an annual pay deal at the company’s Giheung Campus, about 40 kilometers south of Seoul, on Aug. 10, 2022, in this photo provided by the company.

Samsung’s biggest labor union has been seeking participants in the legal action on its website since last Thursday. The union has around 6,000 members, some five percent of Samsung’s domestic employees.

The tech giant, in 2014, introduced a peak wage policy, which gradually reduces salaries for senior workers several years before retirement. At that time, it raised the retirement age to 60 years old from the previous 55 years old.

The move came after the Supreme Court ruled against the system in May, saying the peak wage system is illegal discrimination against workers on the basis of age.

The highest court noted the system violates a clause of the Act on Prohibition of Age Discrimination in Employment and Aged Employment Promotion, which stipulates that workers and persons wanting to become workers should not be discriminated against on the basis of age without reasonable reasons.

Samsung has countered it was running the system within legal bounds.

In August, Samsung and its union signed their first annual wage deal in the company’s history. At that time, the two sides agreed to form a task force to improve working conditions and to the peak wage policy.