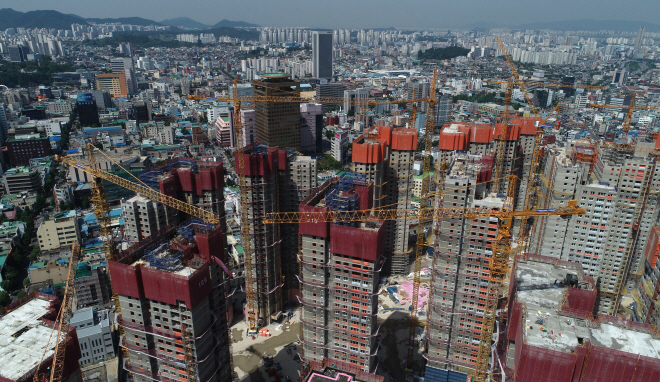 Workers stage a work stoppage at an apartment building construction site in the southwestern city of Gwangju, June 4, 2019, calling for a pay raise and prohibition of the use of smaller tower cranes that they claim are accident-prone. (Yonhap)

The operation of around 2,500 tower cranes was suspended at construction sites, with the same number of unionized workers staging a work stoppage on top of them.

The workers called for a 7 percent wage hike and better working conditions. They also urged the government to ban builders from using tower cranes whose load weight is less than 3 tons, claiming they are prone to safety accidents.

A smaller crane is operable with remote control equipment. Its operation also does not require a state certificate, only 20 hours of training.

The labor groups claimed the government has not come up with proper measures to tackle accidents involving smaller tower cranes.

“The use of unmanned tower cranes has increased at large (construction) sites. Such smaller cranes have no limitation in their uses, raising concerns about safety accidents,” said Im Kye-soo, a senior official at the KCTU’s unit in the southern port city of Busan.

Some experts said the strike was apparently driven by the fact that the frequent use of smaller tower cranes could threaten livelihoods of unionized workers.

An association of local builders estimated that the strike stopped the operation of 70 percent of all tower cranes in use at construction sites.

The workers are sleeping in the crane cockpits and eating meals brought to them by their co-workers on the ground. 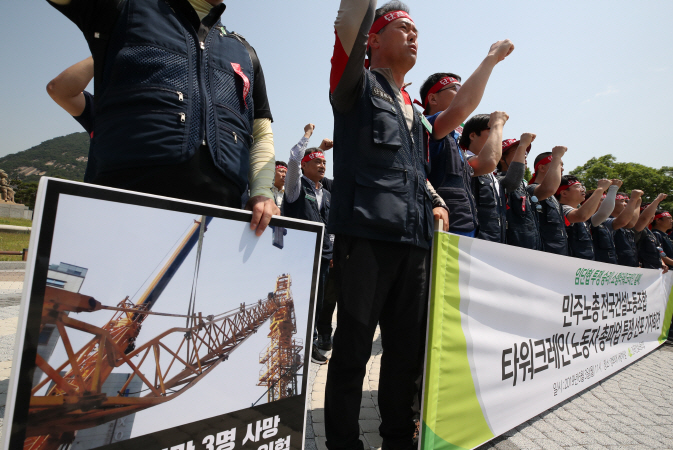 The workers called for a 7 percent wage hike and better working conditions. (Yonhap)

Police and firefighters said they are taking safety measures, such as putting air mattresses on the ground, in case of possible accidents.

A potential protraction in the strike is feared to hamper construction work under way amid the slowing economy.

“There will be inevitable setbacks in construction as work involving tower cranes accounts for 50 percent of the whole process. Currently, we are doing jobs on electrical installations,” an official at a construction site said.

The land ministry rejected demands by the unionized workers to ban the use of small tower cranes, citing no causality between accidents and their use.

“The government cannot intervene in builders’ decisions whether to use big or small tower cranes,” a ministry official said.

“Those who operate smaller cranes are also workers who do not join the labor union. The government cannot remove them from their jobs,” he added.

The ministry also rebutted the labor groups’ claim that small cranes are vulnerable to accidents.

Over the last five years, the ratio of fatal accidents in the use of normal cranes to smaller ones was 7-to-3, almost the same as the number of cranes in operation, it said.

The government also added it plans to unveil a set of measures to strengthen safety controls on smaller cranes late this month.