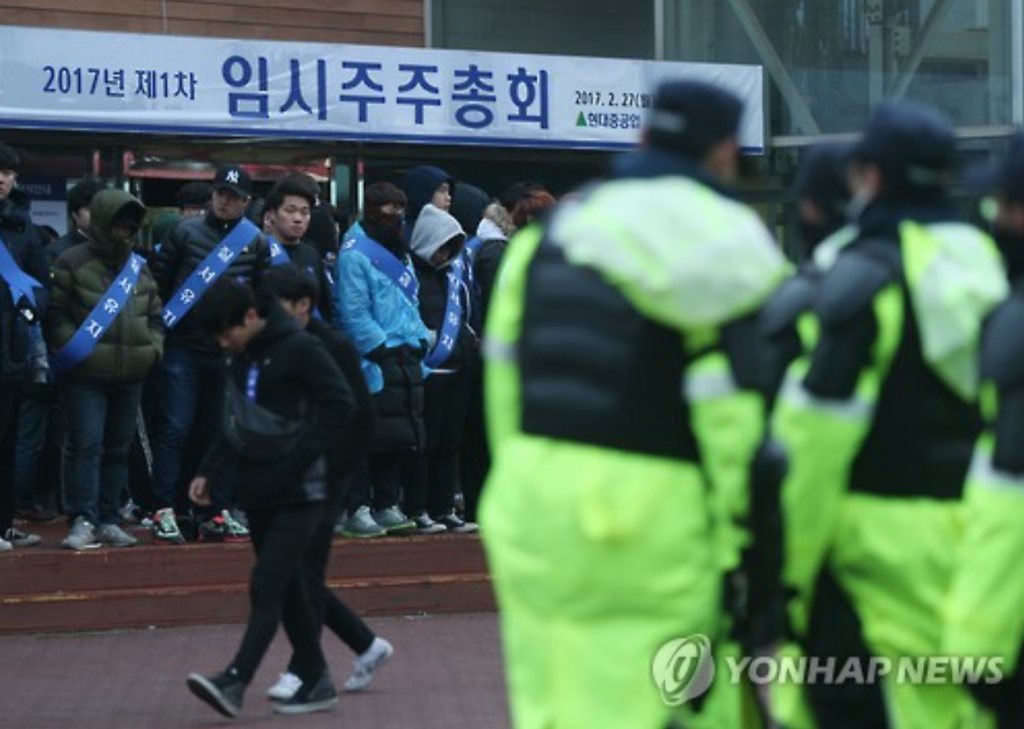 Security guards and police are on standby in front of a hall where the shareholder meeting of Hyundai Heavy will be held, in case of scuffles between the company officials and the labor union, in Ulsan on Feb. 27, 2017. (image: Yonhap)

The labor union said it has called on its 14,000 workers to stage an eight-hour sit-down starting at 8:00 a.m., continuing the strike following the two previous walkouts on Thursday and Friday of last week.

The latest strike is aimed at raising voices against the company’s preliminary shareholder meeting, scheduled later in the morning, during which the company is seeking to get shareholder approval on a spin-off scheme vital to its financial recovery.

Over a thousand workers who hold company shares are expected to attend the shareholder meeting slated for 10:00 a.m. in an act of protest, the labor union said.

The series of strikes over the past week came as the shipbuilder, once the world’s largest, unveiled a plan last year to reorganize its businesses into six separate companies to regain competitiveness and financial health. The decision is part of the shipyard’s self-rescue plans to sell noncore assets and cut jobs.

Of the workers, the labor union said about 1,500 attended the two previous strikes each, while the company claimed attendance of between 800-900.

The company said the scheme will be dealt with in accordance with the law, warning that it will “strictly hold responsible any unlawful acts to sabotage the shareholder meeting.”

South Korean shipbuilders, including Hyundai Heavy’s rivals Samsung Heavy Industries Co. and Daewoo Shipbuilding & Marine Engineering Co., have been under financial strain due to a delay in the construction of overseas facilities and falling new orders, resulting in massive losses.