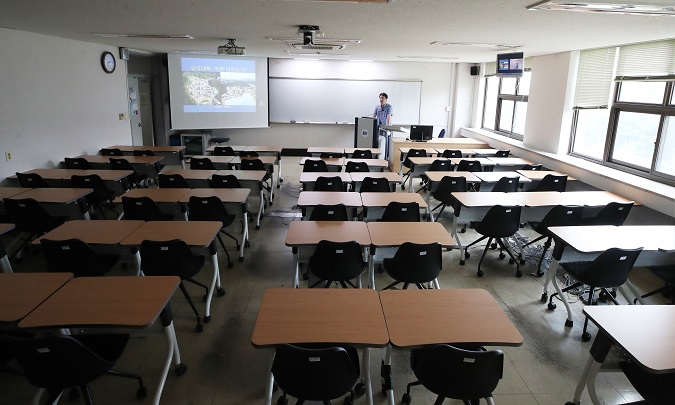 A professor prepares for online instruction at Dankook University in Yongin, Gyeonggi Province, on Aug. 31, 2020. (Yonhap)

For the first time in school history, Chonnam National University was only able to enroll 4,067 new students, leaving 140 slots unfilled.

Far East University brought in only 633 new freshmen for 894 available places, a registration rate of only 70.9 percent, and down 27 percentage points since last year, when the registration rate stood at 98 percent.

While local universities have been expecting difficulties in recruiting new students due to a dwindling population and strong preference among potential students to go to universities in the greater Seoul Area, the shock still comes as a surprise.

Considering the shrinking student population, an overwhelming number of universities will have to stand at the mercy of education and school authorities as restructuring may be in order, experts say.

“Student recruiting will become even harder,” said a school official from North Chungcheong Province. “Universities need to start looking after their survival.”