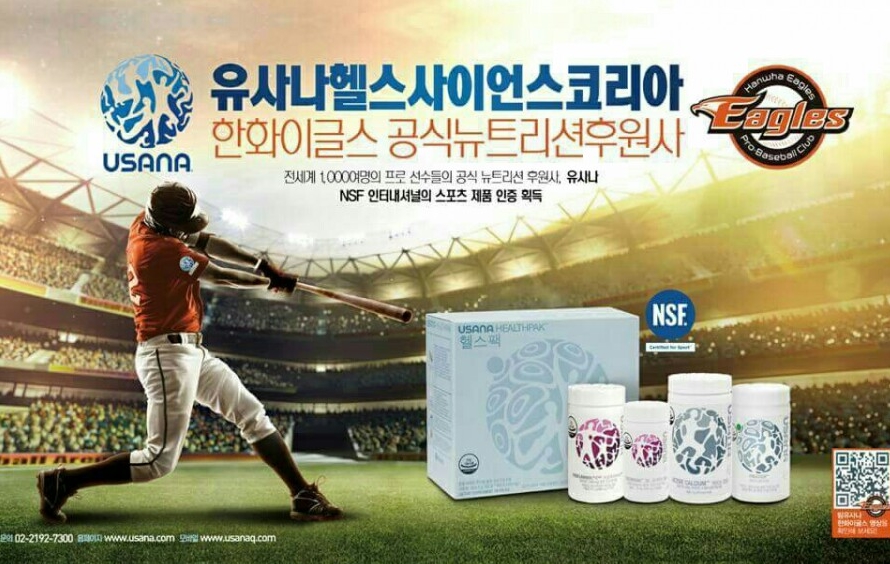 SALT LAKE CITY, Mar. 2 (Korea Bizwire) – Having recently hit record breaking net sales of more than $1 billion in 2016, USANA Health Sciences looks forward as it continues to create the healthiest family on earth. As the nutritional company expands its presence and reach, it recently became the Official Nutritional Partner of the Hanwha Eagles, one of Korea’s top professional baseballs teams in the Korea Baseball Organization (KBO).

“Baseball is one of the most popular sports in Korea, and as one of the leading nutritional companies in the country, we felt that partnering with an accomplished team like the Hanwha Eagles was the perfect opportunity to expand our overall presence in Korea,” said Choong Kim, general manager of USANA Korea. “We look forward to supporting the Eagles this season and supplying them with high-quality nutritional products to supplement the nutrition they need to perform their best on and off the field.”

The Hanwha Eagles are one of KBO’s leading teams, holding one championship title and five runner-up positions in the Korean Series. Several notable players have been produced through the club, including Hyun-Jin Ryu, the first ever KBO athlete to go directly to MLB.

“It has been exciting to see new teams and athletes around the world trust their health to USANA’s high-quality products, and even more so as we celebrate our 25th year of business,” said Dan Macuga, USANA’s chief communications officer. “USANA prides itself on the number of athletes we partner with, and to watch Team USANA expand to more than 20 countries over the years has been a testament to our program. We welcome the Hanwha Eagles to the Team USANA family and look forward to what the future holds.”

USANA supplies thousands of elite and professional athletes around the world with its high-quality and NSF-tested products. It is also the Official Nutritional Supplement of the Women’s Tennis Association, U.S. Ski and Snowboard Association, the English Premier League’s AFC Bournemouth, the National Korean Judo team and select members of the Korea Speed Skating teams.

Most recently through its China subsidiary—BabyCare Ltd—USANA products are also supplied to nearly 1,300 Chinese athletes through its partnership with China’s General Administration of Sports Training Bureau.

The Hanwha Eagles will take flight on March 14 as they open the 2017 season against the LG Twins.

*The mentioned athletes are either distributors or dedicated USANA product users who have received compensation and/or complimentary USANA products for their partnership with USANA.

About USANA
Founded in 1992, USANA Health Sciences (NYSE: USNA) is a U.S.-based nutritional company that manufactures high-quality supplements, personal care and healthy products in its FDA-registered facility in Salt Lake City. Learn more about USANA by visiting our website http://www.usana.com or the official USANA blog http://whatsupusana.com.