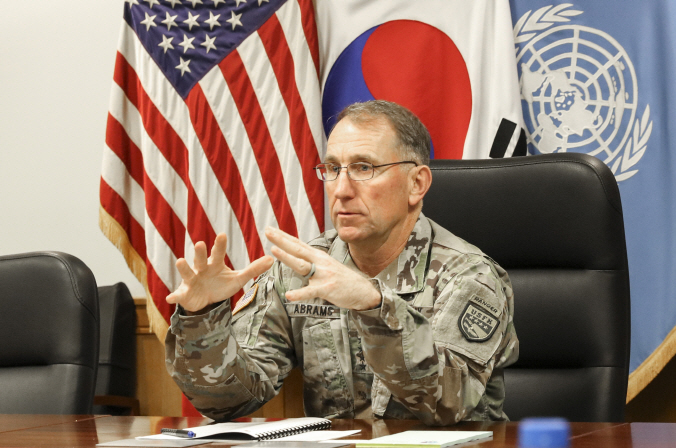 “Cannot underscore enough how great KCDC has been for us to work with. Open, transparent, collaborative and extremely helpful. They have been tireless, around the clock for over a month and going strong,” Abrams tweeted Monday.

KCDC stands for Korea Centers for Disease Control and Prevention.

The praise is the latest in a series of similar compliments the commander has made on South Korea’s response against the COVID-19 outbreak.

“On KCDC, I want to commend them for their incredible professionalism, transparency and coordination with us. They’ve been great teammates,” the commander said during a press briefing Friday.

Noting that USFK received test results on suspected patients in about 24 hours, Abrams said that in many cases, the KCDC “were taking USFK samples and pushing them up higher in the queue” to make sure the military got the results back soon.

Among the USFK-related population, nine have tested positive so far, with the latest case being reported March 10.

Also referring to the decline of the new infections in the southeastern city of Daegu, which has been the heart of the outbreak here, the U.S. commander said it is a “crystal clear example of how a containment strategy works.”

South Korea reported 84 new cases of the virus Tuesday, bringing its total infections to 8,320, with 81 deaths. It marks the third straight day daily new infections were in double digits.