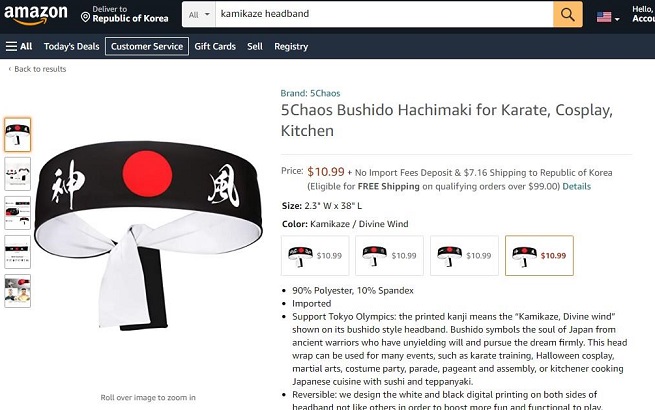 A kamikaze headband is being sold for US$10.99 on Amazon. (image: VANK)

The headbands feature a red circle with the words ‘kami’ and ‘kaze’ written on each side of the circle in Chinese characters.

“Kamikaze is a symbol of Japanese militarism and imperialism, and refers to Japanese military commandos that carried out suicide attacks by flying bomb-equipped planes during World War II,” said VANK in an email.

Amazon also sells headbands that depict the Japanese hakenkreuz, with the words ‘ban’ and ‘zai’ written in Chinese characters.

These shopping malls have banned the Nazi swastika and other racist keywords, while kamikaze, Japanese hakenkreuz and other symbols of Japan’s imperialism continue to show up.

VANK believes that these companies are unaware of the historical fact that kamikaze and Japanese hakenkreuz are fascist symbols of Japanese imperialism.