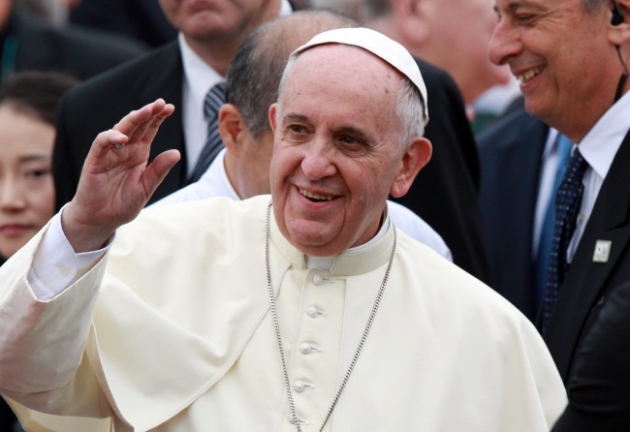 In 2014, Pope Francis visited South Korea and said Koreans should forgive each other “unreservedly” if they want peace and reconciliation on the divided peninsula. (image: Yonhap)

Paloma Garcia Ovejero, deputy spokesperson of the Holy See, told Yonhap News Agency on Monday that the Vatican has nothing to comment on speculation about the pope’s North Korea visit, as the official invitation has yet to arrive.

Ovejero said she understands the world’s huge interest and expectations over the matter but stuck to the previous wait-and-see stance.

Ahead of South Korean President Moon Jae-in’s visit to the Vatican on Thursday, Lee Hae-chan, the chairman of South Korea’s ruling Democratic Party, said in Seoul on Monday that he heard Pope Francis is hoping to visit North Korea in the spring of 2019 as its leader Kim Jong-un has invited him to Pyongyang.

Learning of Lee’s remarks through media reports, the Vatican has reportedly inquired about their background.

Moon is scheduled to begin his three-day visit to Italy and the Holy See later Tuesday after wrapping up his trip to France.

The president plans to meet with Pope Francis at noon Thursday to deliver North Korean leader Kim’s wish to invite him to Pyongyang.

A source at the Vatican said that the pope’s overseas trip can be realized after two conditions are met — invitations from the head of state as well as from the country’s bishops’ conference — and the pope accepts the invitations.

“As there are no Catholic priests or bishops’ conference in North Korea, the conditions are not met. But there is also a possibility that North Korea’s special situation can be taken into consideration, as Pope Francis has steadily stressed dialogue and reconciliation to ease tensions on the Korean Peninsula.”