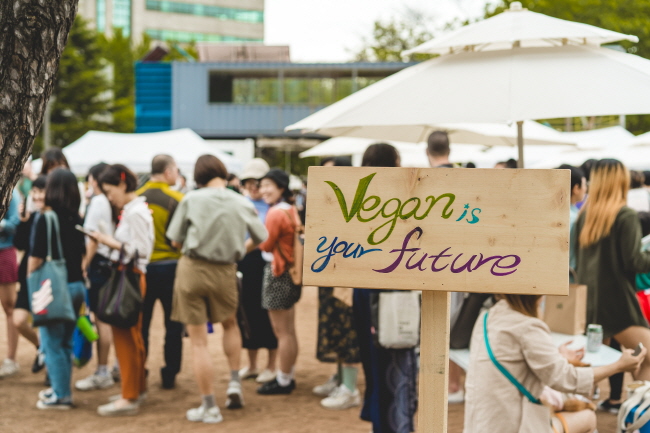 The 7th Vegan Festival is scheduled for Nov. 2-3 at Culture Tank, a petroleum tank site-turned-cultural venue in western Seoul. (Yonhap)

SEOUL, Nov. 2 (Korea Bizwire) — A festival for vegans will kick off in Seoul this weekend, offering yoga classes, food markets and talks for people who have embraced the eco-friendly lifestyle.

The 7th Vegan Festival is scheduled for Nov. 2-3 at Culture Tank, a petroleum tank site-turned-cultural venue in western Seoul, according to the Seoul Metropolitan Government.

Marking World Vegan Day, which falls on Nov. 1 each year, this year’s festival will focus on the themes of “world vegan” and “world peace” and touch on issues like climate change, the organizers said.

A vegan market, filled with over 100 booths selling vegan food, such as veggie patties, and products that have not been tested on animals, will run throughout the festival.

Various workshops and classes will also be available on the sidelines of the event, including yoga classes and talks by vegan gurus and environmental activists.

Showings of two documentaries, one on a bird species living on a lone island in the Pacific and another on the relationship between mankind and animals, are also scheduled.

Organizers said the festival will run under a “zero-waste” scheme where visitors can clean the dishes they’ve used or bring their own tumblers and cutlery.

Veganism refers to a lifestyle refraining from using animal products and opposed to viewing animals as commodities. People who are on a vegan diet avoid all animal and animal-derived products.

2 thoughts on “Vegan Fest to Open This Weekend”