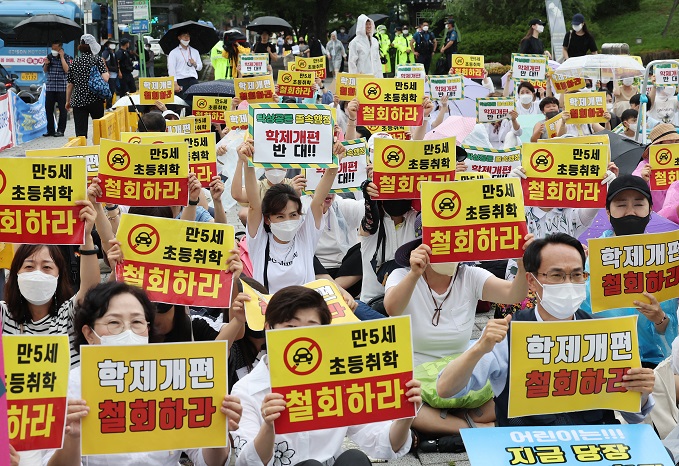 Activists call for withdrawal of the government’s plan to lower the school entry age by one year to 5 starting next year in front of the War Memorial of Korea in central Seoul on Aug. 2, 2022. (Yonhap)

SEOUL, Aug. 9 (Korea Bizwire) — Vice Education Minister Jang Sang-yoon said Tuesday it has become “realistically difficult” to continue to push ahead with a widely unpopular proposal to lower the elementary school starting age by one year to 5.

The remark was seen as meaning the government is scrapping the proposal after Education Minister Park Soon-ae stepped down a day earlier amid an outcry from teachers and parents against the plan to advance the school starting age.

“It’s hard to say right now at this place that we are going to scrap it and will no longer push for it. But we’ve determined that it has become realistically difficult to push ahead with it,” Jang told the parliamentary education committee.

Many teachers and parents have been strongly protesting the policy proposal that they say would further deepen already fierce competition at schools and disregard children’s developmental progress.

As criticism rose, Park stepped down as education minister doubling as deputy prime minister for social affairs, just 34 days after taking office, becoming the Yoon Suk-yeol administration’s first Cabinet member to do so.