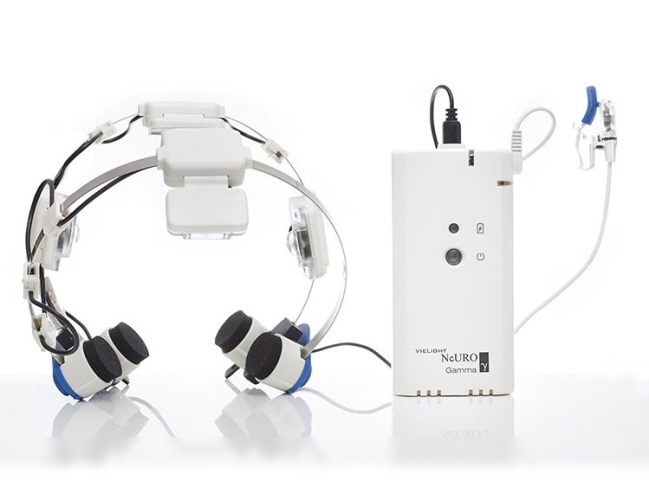 Toronto, Canada, Jun. 4 (Korea Bizwire) – Vielight Inc. of Toronto, a leader in brain photobiomodulation (PBM) technology, announces that the primary site for its pivotal clinical trial, St. Michael’s Hospital, in Toronto, has been activated. The trial will be a randomized, placebo-controlled study involving 228 subjects with moderate to severe cognitive impairment due to Alzheimer’s Disease.

This pivotal trial will be conducted across North America. St. Michael’s Hospital is the first among the eight sites that will carry out the study. The protocol of the study has been reviewed by the U.S. Food and Drug Administration (FDA) and Health Canada.

The device in investigation, called the “Vielight Neuro RX Gamma”, is based on Vielight’s proprietary PBM technology which directs near infrared light, pulsing at the gamma rate of 40 Hz, to selected regions of the brain. The procedure is non-invasive, and the device has been designed to be suitable for home-use. Subject to regulatory clearance, the device will be indicated for Alzheimer patients with moderate to severe impairment, the group that demands the most care and has the largest economic burden.

This clinical trial is timely against the backdrop of many unsuccessful attempts by pharmaceutical and device companies to demonstrate acceptable efficacy and safety to address the disease. Currently, no other modality is in a clinical trial that is expected to demonstrate clinical outcomes within the time anticipated for the Vielight study to be completed.

Recently published studies have shed more light on the potential of the Neuro RX Gamma to modify the pathology of Alzheimer’s Disease. These studies presented findings in clinical assessments and functional magnetic resonance imaging (fMRI), warranting the move forward with the large pivotal clinical trial.

Recruitment for the study will begin shortly. The trial will be independently managed by the Applied Health Research Centre (AHRC), a methodology center affiliated with St. Michael’s Hospital. Further information and contact details for participation enquiries can be found at https://clinicaltrials.gov/ct2/show/NCT03484143.

Principal Investigator at St. Michael’s Hospital, Dr. Corinne Fischer, M.D., said, “In spite of substantial efforts to establish effective treatments for Alzheimer’s disease, progress has been, unfortunately, limited and a cure does not yet exist. Although not conventional as an Alzheimer’s disease solution, we look forward to investigating the potential of Vielight’s technology in the treatment of this difficult disease based on promising early evidence.”

Margaret A. Naeser, Ph.D., Research Professor of Neurology, Boston University School of Medicine, said: “My research studies into the use of PBM in aphasia, post-traumatic stress disorder (PTSD), traumatic brain injury, and dementia have shown me that we are seeing just the tip of the iceberg of healing potential for this technology.”

Michael Hamblin Ph.D., Retired Principal Investigator at the Wellman Center for Photomedicine at Massachusetts General Hospital, and Associate Professor of Dermatology at Harvard Medical School, said, “For more than 50 years, researchers have been demonstrating the potential of PBM to treat many medical conditions. However, large controlled clinical trials have been elusive. Vielight has been the first to demonstrate successful clinical outcomes for dementia in small early investigations, and we look forward to the findings of this pivotal trial.”

Lew Lim, Ph.D., Founder and CEO of Vielight, expressed, “A very complex disease like Alzheimer’s poses a big challenge to any researcher, and even more so for a small team like ours. Despite the solid science and strong early evidence, few were ready to ride with us. I am grateful to the courageous parties who have helped us to get to this point of a major clinical trial. I hope that we will all be a part of something special and important in the end.”

About Vielight Inc.: Vielight Inc. is a recognized leader in the application of photobiomodulation (PBM) for supporting mental and physical well-being. Much of Vielight’s work has been focused on research of the effects of PBM on the brain, and on translation of PBM technology into practical uses. For more info visit company’s website: https://vielight.com.