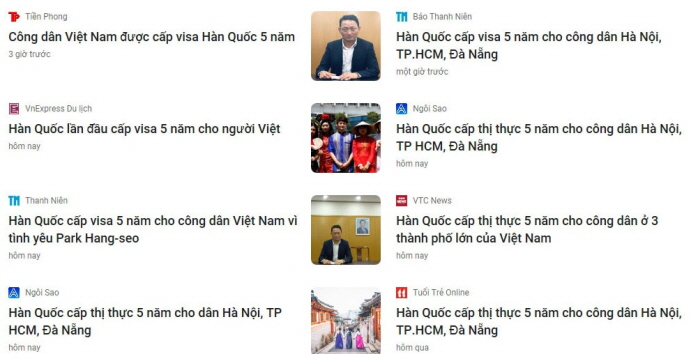 SEOUL, Nov. 28 (Korea Bizwire) — Vietnamese media have spotlighted the South Korean government’s recent decision to allow residents of a number of large cities in the Southeast Asian country to acquire multiple-entry visas for travel to Korea.

Multiple-entry visas allow recipients to freely visit their destination country for a certain period of time.

The South Korean Ministry of Justice announced on Friday that Vietnamese residents of Hanoi, Ho Chi Minh City, and Da Nang will be allowed to apply for C-3 multiple-entry visas valid for five years.

They seemed particularly intrigued when Kim Do-hyun, the South Korean ambassador to Vietnam, said in a local interview that “Vietnam was the first ASEAN member state to be granted multiple-entry visas to South Korea.”

Vietnamese media also mentioned Kim’s remarks on Park Hang-seo, the South Korean head coach for Vietnam’s national football team, suggesting that the decision to allow multiple-entry visas was in response to Vietnam’s love and respect for the coach.

They also added reports on ambassador Kim asking the Vietnamese government to extend the visa-exempt entry period for South Korean tourists from 15 days to one month.

“I would like to thank Mr. Park Hang-seo for serving as bridge that connects South Korea and Vietnam closer than ever,” said one Vietnamese netizen.

“I would also like to thank the South Korean people for our friendship built through soccer.”

The mayor of Da Nang sent a text message to ambassador Kim in which he said that he strongly believes in “Vietnam and South Korea’s stronger relationship.”