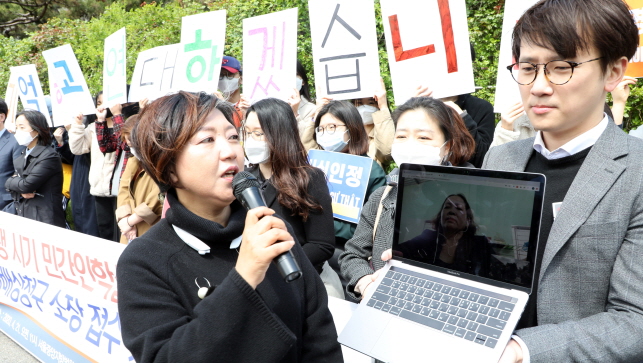 Minbyun officials hold a news conference on the first compensation lawsuit against the South Korean government by a Vietnamese national, in Seoul on April 21, 2020. The plaintiff, Nguyen Titan (on the laptop screen), participated in the conference online. (Yonhap)

SEOUL, April 21 (Korea Bizwire) — A 60-year-old Vietnamese woman has sued the South Korean government for damages over her family’s suffering during the Vietnam War, a local lawyers’ group said Tuesday.

Lawyers for a Democratic Society, an organization of progressive lawyers, dubbed Minbyun in Korean, said that it filed the first-ever compensation lawsuit by a Vietnamese national with Seoul Central District Court on behalf of its plaintiff, Nguyen Titan.

Nguyen claimed that she was shot in the stomach by South Korean troops at a village in the Vietnamese province of Quang Nam on Feb. 12, 1968, when she was eight years old, while her family members were also injured, or killed, in the same attack, according to Minbyun’s Vietnam task force.

The woman also said she was hospitalized for one year due to the gunshot injury, Minbyun said without disclosing the amount of state compensation sought in the lawsuit.

It is the first time that a Vietnamese national has launched a compensation litigation against South Korea’s government over damage incurred during the Vietnam War.

Nguyen visited South Korea in 2015 to testify about her suffering and urge South Korean society to help resolve the problem.

A year ago, she submitted a petition signed by 103 self-identified war victims to Cheong Wa Dae, the presidential office, demanding a thorough investigation and apology over the alleged killings of civilians.