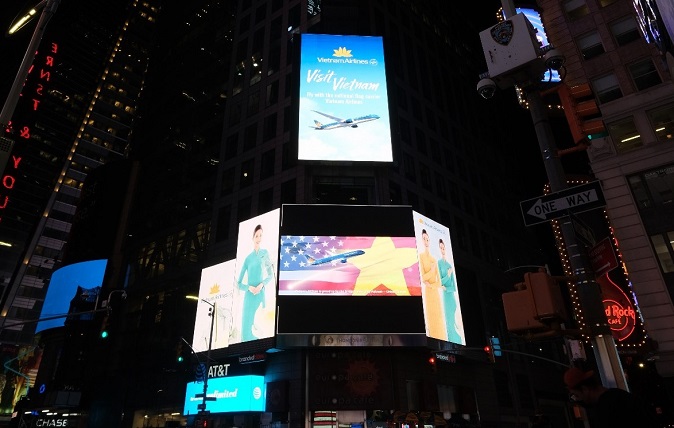 HO CHI MINH CITY, Vietnam, Dec. 3 (Korea Bizwire) — On December 2, 2021, a video highlighting the beauty of Vietnam and the launching of regular flights between Vietnam and the United States was displayed on the main billboard at the heart of New York City’s Times Square, attracting global attention.

Captivating landscapes of Vietnam such as the mysterious Son Doong cave and the awe-inspiring and poetic sceneries of Ha Long Bay and Ninh Binh, along with the vibrant and impressive cities of Da Nang, Hanoi, and Ho Chi Minh City, were proudly showcased on the 700 sq. ft LED screen surrounding the iconic 30-story Thompson Reuters building.

Here, the official launching event of the first Vietnam – U.S. direct commercial flight held on November 28 was also introduced, ushering in the next step for economic and cultural exchange between the two countries. This was certainly a special milestone for the development of Vietnamese aviation as a whole and for Vietnam Airlines — becoming the country’s first airline to operate regular direct commercial flights to the U.S.

The airline plans to increase to seven flights per week once the COVID-19 pandemic is determined to be under control and plans to open a new route to connect Los Angeles to both Hanoi and Ho Chi Minh City.

On November 4, 2021, the U.S. Federal Aviation Administration (FAA) granted licensing for Vietnam Airlines to operate regular direct flights between the two countries. The flag carrier is the first and only Vietnamese airline licensed to conduct regular commercial flights to the U.S.