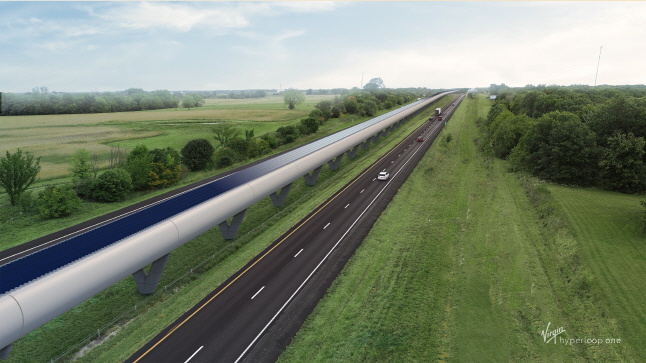 NEW YORK, Sept. 27 (Korea Bizwire) — Today, Virgin Hyperloop One (VHO), the world’s leading hyperloop company, announced that its groundbreaking hyperloop system is poised to be the most energy-efficient mode of mass transportation in the world. In conjunction with Climate Week NYC, Los Angeles-based Virgin Hyperloop One made its announcement from Rockefeller Plaza® at Rockefeller Center® in New York City, where it is showcasing its XP-1 test vehicle from its Nevada test track. VHO also announced that it is joining the Ellen MacArthur Foundation’s CE100 network, which brings together businesses, innovators, cities, governments, and universities committed to accelerating the transition to a circular economy.

“The only way to address this mounting crisis is head-on. We need big ideas like hyperloop to reach zero-emission transport while rapidly connecting people and goods,” said Sir Richard Branson, founder of the Virgin Group.

“As the world’s population grows, especially our urban populations, global demands for rapid, seamless travel, and more efficient deliveries will continue to rise. We must meet demand in a way that is efficient, clean, and protects the future of our planet,” said Jay Walder, CEO of Virgin Hyperloop One. “Hyperloop technology can be that radical solution, setting the bar for the fastest, most energy-efficient, and sustainable form of travel ever created.”

SUSTAINABILITY
Hyperloop will be able to transport people and goods at nearly 700 miles per hour in depressurized environments via magnetic levitation. It will be able to carry more people than a subway, at airline speeds and with zero direct emissions. By combining an ultra-efficient electric motor, magnetic levitation, and a low-drag environment, the VHO system will be 5 to 10 times more energy-efficient than an airplane and faster than high-speed rail using less energy. VHO’s infrastructure can also support the creation of renewable energy by integrating solar panel technology across the outdoor transport tube system. Depending on the climate, the integration of solar technology could generate two-thirds of a route’s projected energy needs.

VHO is currently working with the Indian government of Maharashtra on a route between Pune and Mumbai. With a combined population of 25 million, the regional city pair sees more than 75 million commuting trips annually, a number which is expected to skyrocket to 130 million by 2026. The implementation of a regional VHO system could reduce local greenhouse gas emissions by up to 150,000 tons (300 million pounds) annually while creating 1.8 million new jobs and $36 billion in economic impact across the region.

JOINING THE CIRCULAR ECONOMY
In addition to VHO’s commitment to reduce the environmental impact of the transportation industry, Virgin Hyperloop One joins the Ellen MacArthur Foundation’s Circular Economy 100 Network (CE100) as an ‘emerging innovator’. The CE100 brings together businesses, innovators, cities, governments, and universities committed to accelerating the transition to a circular economy. By joining the CE100 network, VHO commits to creating a circular hyperloop framework that is restorative and regenerative by design, establishing methods to reuse decommissioned elements of its system and reducing its carbon output. VHO is the first mass transportation company to join the prestigious network, which includes companies like Google, Apple, and Unilever.

“We are delighted to welcome Virgin Hyperloop One to the CE100, the world’s leading circular economy network. It is this collaboration among our diverse and dynamic network that enables members to realise circular economy innovation opportunities much faster than they could alone, and we are excited that Virgin Hyperloop One is now part of this community,” said Joe Murphy, CE100 lead, Ellen MacArthur Foundation.

“The Ellen MacArthur Foundation has done an excellent job of identifying how we can build a thriving, low-carbon economy, and is bringing together world-leading organisations to deliver it,” said Jay Walder, CEO of Virgin Hyperloop One

Today’s event at Rockefeller Plaza introduced New Yorkers to hyperloop technology, showcasing the real-world XP-1 test vehicle and allowing passers-by to envision what the introduction of a hyperloop route could mean for their lives, when cities were connected like metro stops and location is no longer a constraint when choosing where to live or work.

The VHO stop in New York is part of a broader roadshow across the United States, which has already made stops in Dallas-Fort Worth, Kansas City, and Columbus. Following New York, VHO will make stops in Raleigh and Washington D.C. See more information on these stops here.

Download images and routes of Virgin Hyperloop One here.

About the Ellen MacArthur Foundation

The Ellen MacArthur Foundation was launched in 2010 with the aim of accelerating the transition to the circular economy. Since its creation, the charity has emerged as a global thought leader, putting the circular economy on the agenda of decision-makers around the world. The charity’s work focuses on seven key areas: insight and analysis; business; institutions, governments, and cities; systemic initiatives; circular design; learning; and communications. For further information please visit www.ellenmacarthurfoundation.org and @circulareconomy.

About Virgin Hyperloop One

Virgin Hyperloop One is the only company in the world that has successfully tested its hyperloop technology at scale, launching the first new mode of mass transportation in over 100 years. The company successfully operated a full-scale hyperloop vehicle using electric propulsion and electromagnetic levitation under near-vacuum conditions, realizing a fundamentally new form of transportation that is faster, safer, cheaper, and more sustainable than existing modes. The company is now working with governments, partners, and investors around the world to make hyperloop a reality in years, not decades. They currently have projects underway in Missouri, Texas, Colorado, the Midwest, India, and the UAE. Learn more about Virgin Hyperloop One’s technology, vision, and ongoing projects here.

A photo accompanying this announcement is available at https://www.globenewswire.com/NewsRoom/AttachmentNg/8a68349a-cf2f-490f-9c49-aa22c9413ad5