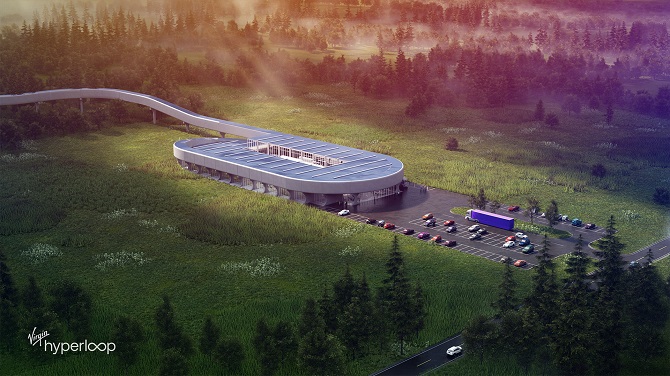 A rendering of the Hyperloop Certification Center in West Virginia. Design by Bjarke Ingels Group (BIG) and rendering by SeeThree.

NEW DELHI, India, Oct. 8 (Korea Bizwire) — After years of testing and developing hyperloop technology at their full-scale test site, Virgin Hyperloop unveiled today that the global Hyperloop Certification Center (HCC) will be located in the US state of West Virginia.

“Today is one of the most exciting days in Virgin Hyperloop’s history,” said Sir Richard Branson, Founder of the Virgin Group. “We’re one step closer to making hyperloop travel a reality for people everywhere.”

The Hyperloop Certification Center (HCC) is a major milestone in the maturity and acceptance of hyperloop systems globally. A testament to Virgin Hyperloop’s technology advancement, it will enable global regulatory bodies to work with US federal authorities to establish and set global safety and industry standards for the new hyperloop category, which can subsequently be adopted and re-applied in other geographies.

“I’ve always been a big believer in the importance of competing against market transitions and Virgin Hyperloop is the clear leader in the future of transportation,” said John Chambers, former Executive Chairman and CEO of Cisco Systems, current founder and CEO of JC2 Ventures, and native of West Virginia. “With the development of the HCC in West Virginia, my home state, the company is one step closer to their dream of bringing their transformative technology to India and beyond. We look forward to supporting Virgin Hyperloop in this journey and imagining what is possible for the next generation of innovation, entrepreneurism, and inclusion, together.”

This announcement builds off of significant progress around the world on the regulatory front. In India, the Government of Maharashtra has deemed hyperloop a public infrastructure project and approved the Virgin Hyperloop-DP World Consortium as the Original Project Proponent (OPP) for the Mumbai-Pune hyperloop project. This is a landmark announcement for building the Pune-Mumbai hyperloop transportation system, recognizing hyperloop technology alongside other more traditional forms of mass transit. To forward this progress, the Principal Scientific Advisor (PSA) to the Government of India, Prof. Vijayraghavan, has set up an independent committee called the Consultative Group on Future of Transportation (CGFT) to explore the regulatory path for hyperloop.

This global regulatory momentum, combined with the advancements at the HCC, will pave the way for the certification of hyperloop systems around the world – the first step towards commercial projects, including those in India, while having the first human testing of the technology take place in the United States.

“The significance of this milestone cannot be overstated,” said Jay Walder, CEO of Virgin Hyperloop. “The establishment of the HCC enables regulatory authorities around the world to come together and establish global safety and industry standards for the new hyperloop category. This brings the hyperloop project connecting Mumbai to Pune in under 25 minutes – and others around the world – one step closer to reality.”

Beyond Maharashtra, there is enormous potential to connect the entire subcontinent. Last month, Virgin Hyperloop announced a ground-breaking partnership with Bangalore International Airports Limited (BIAL) to conduct a feasibility study for a proposed hyperloop corridor from BLR Airport. The study, which focuses on technical, economic and route feasibility, is expected to be completed in 2 phases of 6 months each. With speeds of up to 1,080 kmph, hyperloop could transport thousands of passengers per hour from BLR Airport to the city center in under 10 minutes, according to the preliminary analysis.

Virgin Hyperloop also signed a MoU with the State of Punjab’s Transport Department in December 2019 and hopes to expand on their relationship with Punjab as they continue exploring opportunities in northern India independent of their work in the western and southern regions of the country.

In Europe, the European Commission’s Directorate-General for Mobility and Transport (DGMOVE) has held numerous workshops over the past 2 years with hyperloop companies in conjunction with regulatory authorities and standards bodies – leading to the establishment of a baseline for the functional blocks of a hyperloop system and safety requirements. The European Commission is now carrying out a 9 month study to develop a safety regulatory approach for Europe, the results of which will be used by the Commission to develop the regulatory policy for hyperloop technologies. Active discussions are also underway with the three European regulatory authorities – the European Union Agency for Railways (ERA), the European Union Aviation Safety Agency (EASA), and the European Space Agency (ESA).

In the United States, the US Department of Transportation (USDOT) Secretary Elaine Chao and the Non-Traditional and Emerging Transportation Technology (NETT) Council unveiled a guidance document on a clear regulatory framework for hyperloop in the United States – providing a pathway to regulation and establishing a hyperloop project’s eligibility for federal funding.

Virgin Hyperloop aims to achieve safety certification by 2025, with commercial operations beginning in 2030.

About Virgin Hyperloop
Virgin Hyperloop is the only company in the world that has successfully tested hyperloop technology at scale, launching the first new mode of mass transportation in over 100 years. The company successfully operated a full-scale hyperloop vehicle using electric propulsion and electromagnetic levitation under near-vacuum conditions, realizing a fundamentally new form of transportation that is faster, safer, cheaper, and more sustainable than existing modes. The company is now working with governments, partners, and investors around the world to make hyperloop a reality in years, not decades. Learn more about Virgin Hyperloop’s technology, vision, and ongoing projects here.

A photo accompanying this announcement is available at https://www.globenewswire.com/NewsRoom/AttachmentNg/a82adbb9-bce9-4f7c-bc59-639ab0188f4b