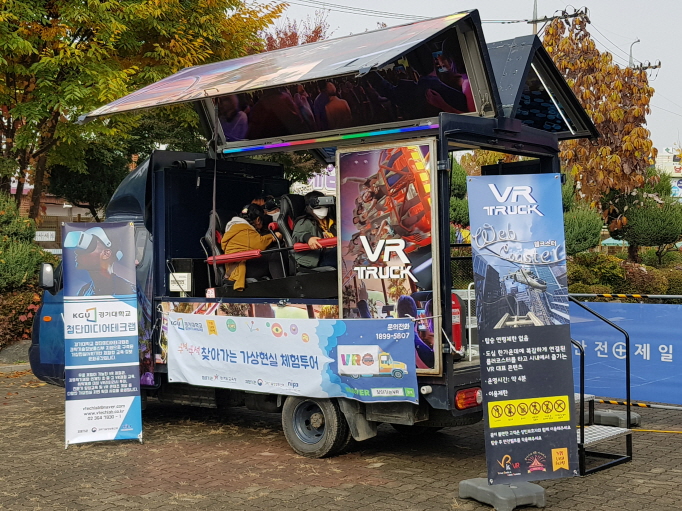 The ‘VR Truck’ service received both a temporary permit and special exception to alter the design of trucks to be used as movable platforms for experiencing various VR content. (image: Ministry of Science and ICT)

SEOUL, Mar. 7 (Korea Bizwire) — A ‘VR Truck’ that goes around to different locations to deliver virtual reality (VR) content to variety of customers will soon be made available.

A unique application that comes up with the estimated cost of scrapping a car will also be introduced.

The South Korean Ministry of Science and ICT approved four projects on Wednesday, including the ‘VR Truck’ and the ‘Car Scrap Estimator’.

They have been given temporary permits which allow them to be released in the market for a temporary period of time. These permits were introduced along with the regulatory sandbox policy which took effect on January 17.

Some have been given ‘special exceptions’ to be exempt of certain regulations while testing and verifying products in development.

The ‘VR Truck’ service, proposed by VRisVR and Lusso Factory Co., received both a temporary permit and special exception to alter the design of trucks to be used as movable platforms for experiencing various VR content, upon condition that the altered trucks receive approval from the Korea Transportation Safety Authority.

Also, the trucks were to be made available only during special events hosted by schools, public agencies, government, and local authorities, and offering VR content rated ‘G’.

While the current legislation bans all unregistered companies from engaging in any act of collecting and scrapping cars, the special exception made it possible for the project to scrap 35,000 cars over the next two years.

“Collecting more cases related to the regulatory sandbox policy will help future projects to take the ‘fast track’ towards being selected,” said You Young-min, Minister of Science and ICT.

“We will make sure that the regulatory sandbox policy, according to its initial intent, will serve as a bedrock of innovation that will help citizens’ everyday lives.”