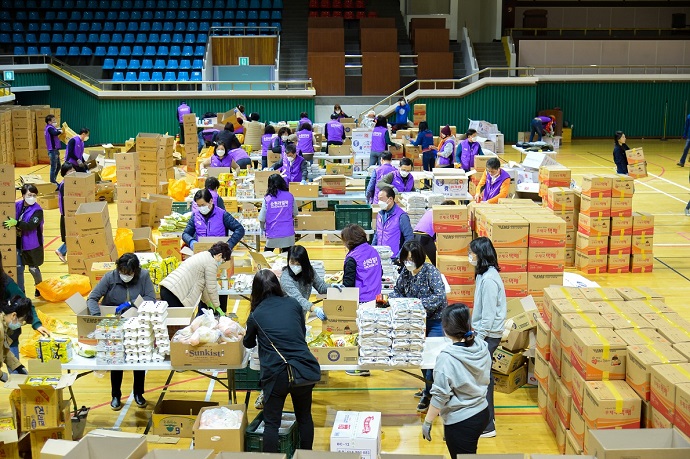 Volunteers sort aid packages made with donations for delivery to the city’s underprivileged citizens, in this file photo provided by the Suncheon City Hall.

SUNCHEON, June 26 (Korea Bizwire) — A wealth sharing campaign has been spreading in Suncheon, a city about 415 kilometers south of Seoul, to support underprivileged citizens hit hard by the coronavirus outbreak, the municipality of Suncheon said Friday.

The campaign was launched in March at the proposal of Suncheon Mayor Heo Seok, who took a cue from the wealthy people of the Joseon Dynasty (1392-1910), who were praised for practicing noblesse oblige by sharing their possessions with the poor under the so-called “gwonbun” movement.

Using the donations, the municipal government has created 500 to 1,000 aid packages every month for distribution to low-income households, disabled people, multicultural households and other underprivileged citizens suffering economic difficulties due to the spread of COVID-19.

The aid packages made with the help of volunteers contain daily necessities, including rice, “ramyeon” (instant noodles), dried laver, fruits and face masks, it said.