Characters of JTBC corporate drama “Reborn Rich” are seen in this photo provided by the Korean cable channel.

SEOUL, Dec. 7 (Korea Bizwire) — For creators of television dramas who are in an uphill battle to catch the attention of viewers in the era of streaming services, popular webtoons have emerged as a proven recipe for success.

Webtoons, a type of digital comics originated from South Korea and usually meant to be read on smartphones, have seen their popularity reaching outside their home base and hooked international readers in Asia, North America and Europe.

Inspired by a wide fan base and creative subjects, a number of webtoons have been adapted into Korean drama series on streaming platforms and local TV channels with success in recent years, including Netflix original series “Hell Bound” “D.P.” and “All of Us are Dead.”

Most lately, the ongoing local cable channel JTBC series “Reborn Rich,” available on Netflix, Disney+ and Rakuten Viki, became the most-watched show in over 50 countries in the first week of its premier, according to the streaming services.

Based on the web-based novel by San Kyung and Naver webtoon published under the title “The Youngest Son of a Chaebol Family” (Korean translation), the fantasy corporate drama follows a man (Song Joong-ki) who was loyal to a wealthy family, was murdered and then sought a different life when reborn.

The eighth episode of the weekend drama garnered 19.4 percent in viewership in South Korea on Sunday, according to analytic company Nielsen Korea, marking the highest record for a Korean drama this year.

The latest rating surpassed the highest rating of another webtoon-based series “Extraordinary Attorney Woo,” a smash-hit legal drama aired on local cable channel ENA this summer and available on Netflix.

The story of a female lawyer with autism spectrum (Park Eun-bin) was one of the most-watched non-English TV shows on Netflix this year, once again proving Korean dramas’ resonance and wide reach regardless of their language. 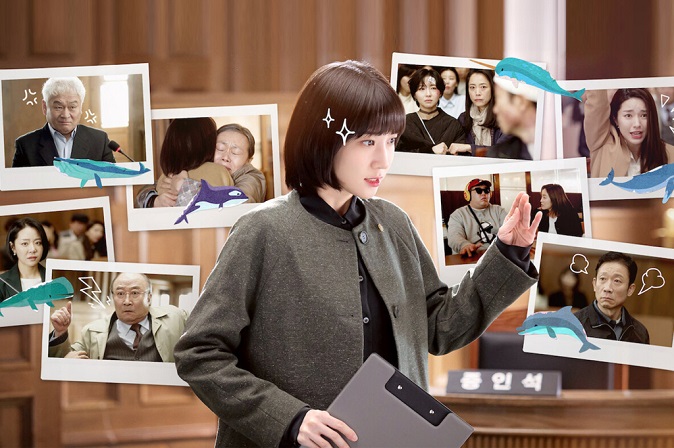 This promotional image of “Extraordinary Attorney Woo” is provided by ENA.

Experts say a wide library of Korean webtoons has drawn attention from content creators as they offer unique, interesting subjects that can relate to niche audiences, often overlooked by mainstream broadcasting channels under regulatory standards in the past.

“Webtoons have emerged as original sources for drama adaptations thanks to their diverse genres and story lines,” said Yoo Geon-sik, director of KBS Public Media Institute, during a webtoon forum held in Bucheon, west of Seoul, last month.

The creative freedom enjoyed by streaming platforms and advanced visualization technology also made it possible for recreating imaginative webtoons on screens.

Tving original series “Yumi’s Cells” based on a popular Naver webtoon showed a unique visual style by skillfully blending the 3D animation and live action, drawing acclaim from both webtoon and drama fans.

The romantic comedy chronicles the life of an office worker, Yumi, from the point of view of her brain cells with scenes of smurf-like creatures who control her many thoughts, actions and behavior.

“As a fan of the original webtoon, I thought the idea of combining 3D animation and live action was really brilliant,” Lee Seun-hyun, an office worker in Seoul, said. “It’s double the fun.” 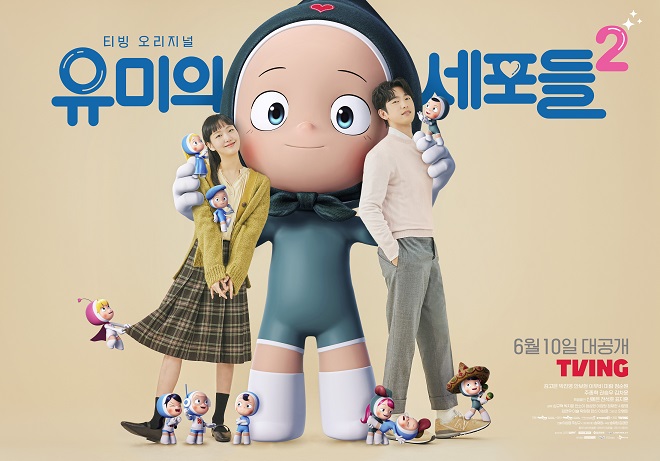 The poster of “Yumi’s Cells 2″ is seen in this photo provided by Korean streaming platform Tving.

Veteran Japanese director Miike Takashi, who took helm of new thriller series “Connect” based on Shin Dae-sung’s webtoon, noticed Korean comics are different from Japanese mangas in that they present fast-paced scenes with a simple background.

“Connect,” premiered on Disney + on Wednesday, tells a gruesome story about a man (Jung Hae-in) who loses one eye to organ harvesters and happens to be connected to a serial killer who transplanted the victim’s eye into his socket.

Computer-generated imagery was used to express what the main character can do with its immortal body.

“I thought simple webtoon images looked like story boards,” Miike said in a round media interview on Tuesday. “The simple images allowed me to imagine various ideas and structure the story line.”

TV Asahi, a major Japanese broadcaster, is set to premier a new Japanese drama series based on “Romance 101,” a hit webtoon series on Naver Webtoon, on New Year’s Day.

It is the network’s second Korean-webtoon adaptation following “Roppongi Class” that aired in July, a Japanese remake of 2020 hit Korean series “Itaewon Class” based on a Kakao webtoon.