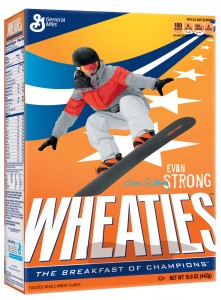 MINNEAPOLIS, March 20, 2014 (Korea Bizwire) – Snowboard cross champion Evan Strong  (@strong_evan) made history after an inspiring performance in Sochi this week, taking home gold and becoming the first elite para-athlete to appear on the iconic Wheaties box. With his determination, perseverance and superlative athletic performance, Evan joins fellow American Champions Mikaela Shiffrin and Sage Kotsenburg with a limited-edition Wheaties box scheduled to hit store shelves this spring.    “We are extremely proud to have Evan as a member of Team Wheaties,” said Jeff Tang, marketing for Wheaties. “His remarkable attitude toward overcoming adversity is truly inspiring. We are honored to celebrate his athletic accomplishments, as well as the strength, courage and generosity that define him as a role model to other athletes.”

Strong, a native of Hawaii, who currently resides in Nevada City, Calif., excelled at extreme sports at a young age, even securing his first skateboarding sponsorship at 13. However, his life was forever changed at 17, when he lost his left leg as a result of a tragic car accident. Inspired by the Challenged Athletes Foundation, and with the support of his family, Strong began training again and soon added snowboarding to his list of athletic achievements — reaching the pinnacle with a historic gold-medal performance in Sochi.

“Joining some of the most elite athletes in the world to be on the Wheaties box is a dream come true,” said Strong. “Despite my injury, I never stopped challenging myself to grow and reach new milestones. I hope my story serves as inspiration for others that anything can be accomplished with hard work and dedication.”

Wheaties has been committed to providing athletes with the nutrition they need to help them perform at their best for more than 85 years. The team behind “The Breakfast of Champions” has worked for decades to learn from food scientists, health professionals and athletes about what active people need to help fuel their active lifestyles. Some of the greatest athletes in American history have been honored by this first-ever whole grain breakfast cereal. Wheaties 100 percent whole grain flakes can be enjoyed a variety of ways including with low-fat chocolate milk for long-lasting energy as part of a complete breakfast. To view Wheaties-inspired recipes as well as a timeline of Wheaties Champions over the decades, visit www.wheaties.com.

Team Wheaties is a select group of elite athletes who represent the best in their respective sports. They were selected for the team based on their athletic achievements as well as how they personify being a champion both on and off the field of competition. Current Team Wheaties athletes include: MVP football star Adrian Peterson; motocross champion Ryan Dungey; speedskaters J.R. Celski and Heather Richardson; alpine skiing champion Mikaela Shiffrin; snowboard slopestyle champion Sage Kotsenburg; para athletes Evan Strong, Blake Leeper and Jessica Long; lacrosse MVP Rob Pannell; snowboard cross champion Nick Baumgartner; decathlete R.J. McGinnis and climber Tommy Caldwell. To find out more about Wheaties and all of the athletes on the team visit www.Wheaties.com or www.facebook.com/Wheaties.