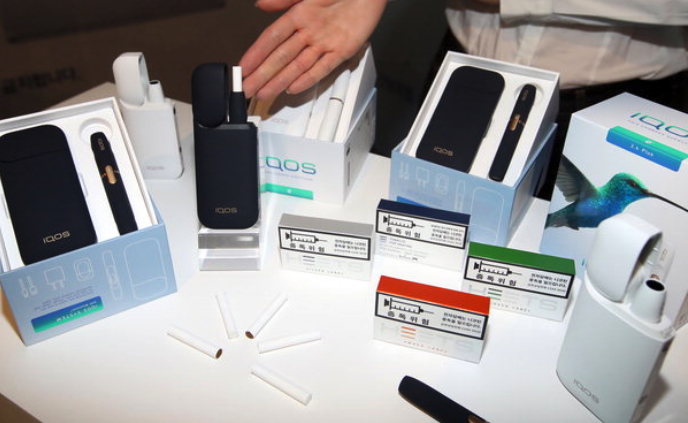 “We believe that smokeless cigarettes are a better choice than existing ones.” (image: Yonhap)

SEOUL, May 18 (Korea Bizwire) – On Wednesday, Philip Morris announced that it would begin selling its new e-cigarette iQOS in June, which is allegedly relatively harmless compared to typical cigarettes because it “heats” the tobacco leaves inserted into the device instead of “burning” them.

The announcement immediately posed a new concern for South Korea’s health authorities, which have been bolstering efforts to curb cigarette consumption in recent years, including almost doubling cigarette prices in 2015 and introducing graphic warning images to cigarette packaging this year.

The Ministry of Health and Welfare will still be able to levy the same tax rate imposed on e-cigs, which is lower than conventional cigarettes, with a recent legal revision that also covers non-liquid-based e-cigarettes.

But health and anti-smoking organizations fear that iQOS might discourage smokers from their cessation efforts, or even bring about a new trend of smoking. iQOS products are currently sold in 25 countries including Japan, where the device accounts for almost 9 percent of the local tobacco market.

“Philip Morris has invested roughly 3.4 trillion won ($3 billion) since 2008 in developing a tobacco product that doesn’t burn,” said Chong Il-woo, the managing director of Phillip Morris Korea, in Wednesday’s briefing. “We believe that smokeless cigarettes are a better choice than existing ones.”

According to the company, the steam from iQOS has about 90 percent less of the toxic substances found in cigarette smoke. It also emphasizes that it leaves almost no smell, and no ash whatsoever.

“No matter how less toxic the new e-cig is to health, the general consensus among experts is that continuous exposure is still harmful,” said Kwon Byung-ki, director of health promotion at the ministry. “We’ll be sticking to our anti-smoking policies to promote the health of Korean citizens, regardless of the new launch.”

The ministry is arranging a conference next week to gather opinions from experts in related fields, and is asking 20 countries in the FCTC (Framework Convention on Tobacco Control) on how to manage new types of e-cigs.

Officials also added that they will consider obligating e-cigs to feature graphic warning images as well, a practice that is currently limited to traditional cigarette packs. At the moment, e-liquid nicotine packages are only required to feature a needle image that warns of addiction.