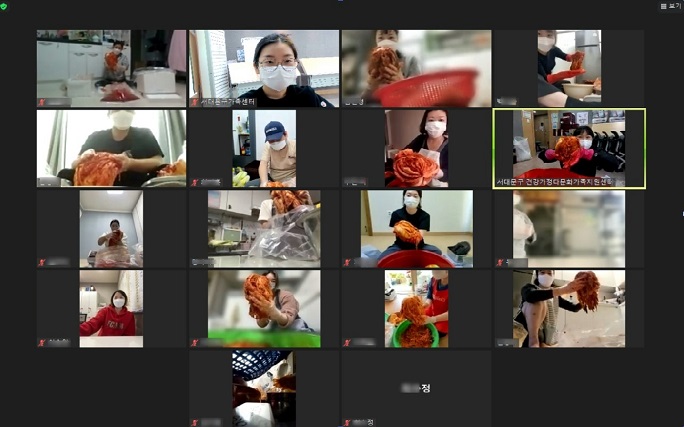 In this captured image provided by the Seodaemun ward office, people in single households participate in the office’s program to make kimchi on Zoom on Dec. 4, 2021.

SEOUL, Feb. 10 (Korea Bizwire) — For Lee Bok-won, a 69-year-old woman who lives alone in western Seoul, stocking up on fresh homemade kimchi during winter has been quite a chore for the past several years.

The process, traditionally done by family groups over multiple days, usually involves a painstaking process of soaking a large amount of cabbage with salt water, and later spicing it with a mixture of red pepper power and other seasonings.

This winter, however, Lee managed to go through the process with relative ease thanks to the help from her local community office in Seodaemun, which delivered to her pre-salted cabbages and seasonings and offered a one-hour kimchi-making course over Zoom for her and her neighbors.

“Kimchi making (or procuring) is a must for every household in Korea, but living alone, you often sit it out. People at advanced ages like me find it especially hard to make or procure kimchi,” Lee said, recalling her participation in the Zoom event held in early December.

The participants included a wide range of people in terms of age, from those in their 20s to 70s, with some of them totally new to the experience of making the Korean staple.

“It was beautifully made and especially delicious for someone who prefers fresh made kimchi to more fermented ones,” Lee said, adding that fresh kimchi is seldom available to her as she does not own a dedicated kimchi refrigerator.

Hwang Sae-bom, a social worker at the Seodaemun district’s center for wellbeing and multicultural families, said the class was enthusiastically received by the participants, and one of them said she gained the courage to do it on her own next time. 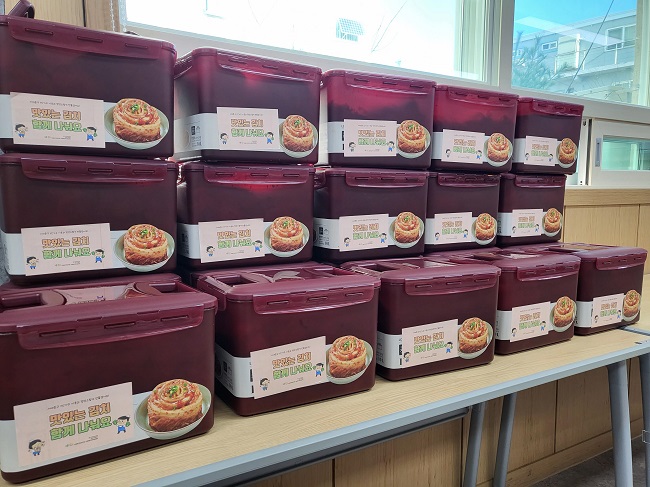 This photo provided by the Seodaemun ward office shows boxes of kimchi made by participants in the office’s program for single households. Half of the traditional Korean preserves made in the program were donated to needy people.

Like Lee, a growing number of people who live alone in Seoul are increasingly hard-pressed to tackle life’s various hassles independently.

Hence Seoul’s 25 ward offices are currently providing a variety of participatory programs to reach out to the city’s growing single-household population, which had largely been left out of the city’s core welfare policies.

As of late, single households account for 34.9 percent, or 1.39 million, of the city’s total households. The growth in the demographic has also led to increases in cases of unattended deaths or suicide by people who live alone.

Mental health issues in connection with loneliness have also emerged as a major areas of interest among policymakers. 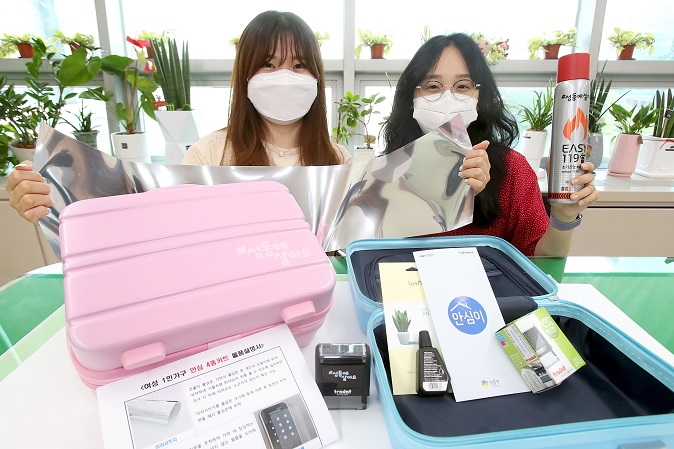 This photo provided by the office of Seoul’s Seongdong district shows a package of security items provided for women who live alone, including those designed to prevent leaks of personal information.

Against such a backdrop, the city and its ward offices are rolling up their sleeves to address not only physical and mental health issues of the demographic but also help with economic and financial independence.

The Seoul city government has also designated one-person households as one of its top policy priority demographics, pledging to spend nearly 5.6 trillion won (US$4.7 billion) over the next five years to cater to their needs, such as health, security and residence.

Programs currently in operation under the city’s plan also include a helper service initiative designed to accompany sick people from single households to hospitals and overnight patrol programs around areas heavily populated by single households, which are often more prone to crimes.

Starting this year, the city also plans to adopt artificial intelligence technologies to launch a new program to monitor the well-being of elderly people in single households who are at higher risks of unattended death.

“As an elderly person living alone, I feel sorry for people in single household. They sometimes don’t know how to cope with complicated situations and also crave for affection from others. They need more attention and a closer watch,” Lee said.