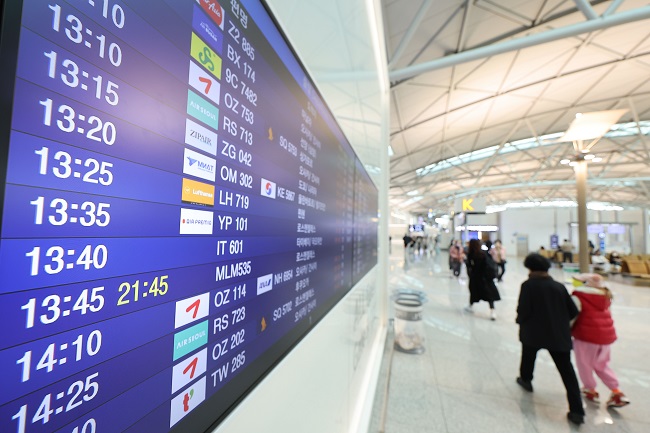 This undated file photo shows travelers walking past an arrival departure board at Incheon International Airport, west of Seoul. (Yonhap)

SEOUL, Dec. 8 (Korea Bizwire) — The workforce of major South Korean travel agencies has nearly halved over the past three years due to the coronavirus pandemic, with the number of tour firms also plummeting, industry data showed Thursday.

The headcount of industry leader Hana Tour came to 1,204 as of the end of September this year, down 52.3 percent from three years earlier, according to the data from the Financial Supervisory Service.

Smaller industry players were also forced to furlough their employees or cut jobs in the wake of the COVID-19 outbreak that put a lid on overseas tour programs.

No. 2 player Modetour Network’s payroll plunged 47.4 percent to 617 over the cited period, with that of Yellow Balloon Tour nose-diving 41.4 percent to 329.

Very Good Tour had 214 workers as of end-September, down 43.5 percent from three years earlier.

Their job cuts came as those tour agencies were hit hard by the pandemic that left them deep in the red due to near-zero demand for overseas travel.

Industry watchers, however, said that starting next year, local tour agencies may increase their payrolls thanks to Seoul’s relaxed coronavirus restrictions on both inbound and outbound travelers, and other positives.

In April, the government sharply eased social distancing rules, including the lifting of all outdoor mask mandates.

Separate data from the Korea Tourism Association showed South Korea had 20,511 tour agencies as of end-September, down 9.3 percent, or 2,098, from three years earlier.