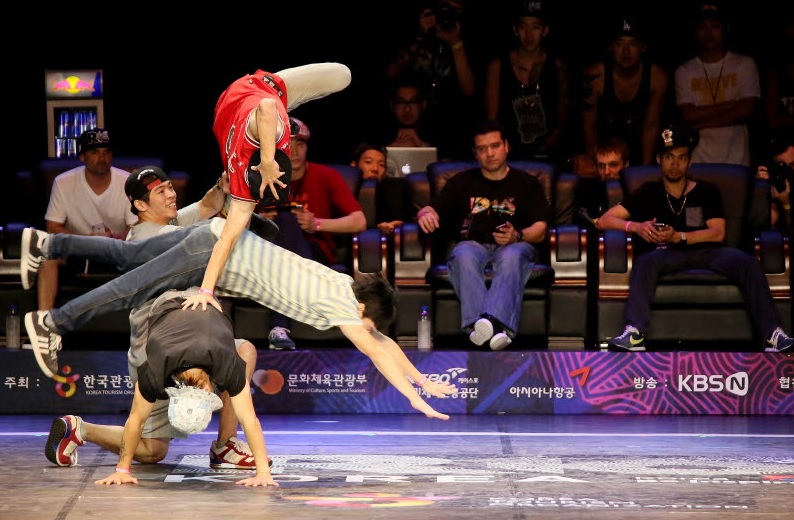 R16 Korea is emerging as an international b-boy festival and is loved to a degree that preliminary competitions are being held in around 20 countries. (image: KTO)

On July 5 and 6, the “R16 Korea 2014 World Finals” will be held at the Olympic Hall in Olympic Park in southeastern Seoul. Sponsored by the Korea Tourism Organization, R16 Korea is an annual global b-boy tournament and urban arts cultural festival.

The main event features solo and crew b-boy battles. Over twenty R16 Championships take place in numerous countries around the globe to determine the competitors for the World Finals. This annual b-boy contest which began in 2007 attracts hot responses and interests from the world with the strong performances and various cultural contents as one of five major b-boying festivals.

The festival also features graffiti artists, street wear designers, musical performers and dancers who specialize in hip-hop, popping, locking and other urban art subcultures from South Korea and other countries.

During the R16 World Finals, top-class b-boys from the world will engage in fierce battles. Especially, among the competitors, Korean team “Gamblerz Crew,” the title holder of the 2008 R16 Championship, will again compete with other b-boy crews and is expected to be a favorite to win the competition.

Also, Park Jae-bum, a former member of K-pop boy group 2pm who showed passionate performance last year, will liven up the mood of the competition with his explosive performance again this year. Recently, he has received much of love with his role as a dance master and charismatic appearance in Mnet’s dancing audition program “Dancing 9.”

At the final stages, American popping dance master Electric Booglaoos will have his splendid showcase, which will boost the hot mood of the festival as most street dancers followed themselves his dance at least once.

An official at KTO said, “R16 Korea is emerging as an international b-boy festival and is loved to a degree that preliminary competitions are being held in around 20 countries and more than 20 million fans worldwide watch YouTube videos related to the competition. We will grow the festival as a major tourism attraction in Korea not only by b-boy battle itself but by various cultural contents accompanying the event.”

Tickets for the “R16 Korea World Finals” are available at its official page (www.R16KOREA.com) and K-Performance page (www.kperformance.org).