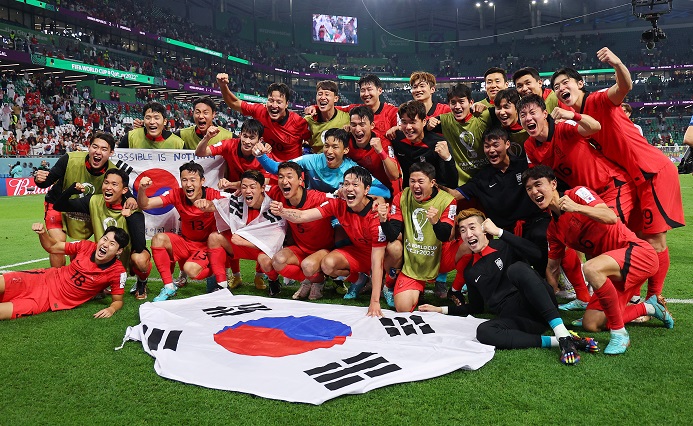 South Korean players celebrate their 2-1 victory over Portugal in the teams’ Group H match that sent them to the round of 16 at the FIFA World Cup at Education City Stadium in Al Rayyan, west of Doha, on Dec. 2, 2022. (Yonhap)

AL RAYYAN, Dec. 3 (Korea Bizwire) — South Korea will be up against Brazil in their first knockout match of the FIFA World Cup in Qatar next week.

South Korea, as the runners-up of Group H, will be heavy underdogs against Brazil, world No. 1 and Group G winners, in their round of 16 match at 10 p.m. Monday at Stadium 974. It will be 4 a.m. Tuesday in South Korea.

South Korea grabbed the second seed in their group with four points by beating Portugal 2-1 on Friday and then getting some help from the two other teams in the group, Uruguay and Ghana.

Uruguay defeated Ghana 2-0 to also reach four points, but finished behind South Korea after losing the tiebreaker in goals scored, 4-2.

Brazil, after clinching their knockout spot early with two straight wins, had a goalless draw with Cameroon in the Friday nightcap to finish the group phase with seven points. Switzerland finished second in Group G and will take on Portugal.

South Korean players had to wait until the end of Group G action, which began at 10 p.m. Friday in Qatar, to see whom they would face in the round of 16.

Switzerland came within a goal of overtaking Brazil for the top spot on Friday, beating Serbia 3-2 when another goal would have put the Swiss in first place on goals scored. 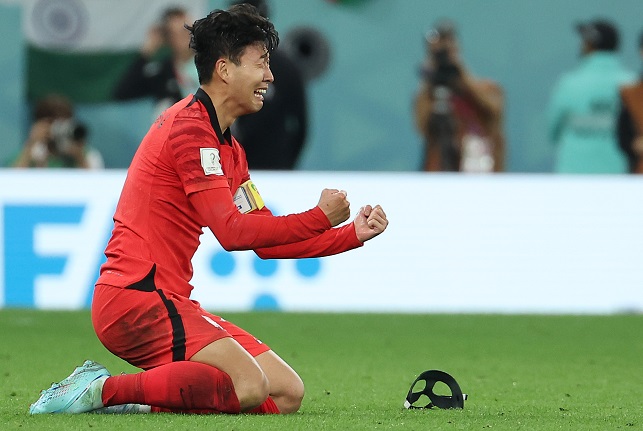 South Korean captain Son Heung-min celebrates his team’s advance to the round of 16 at the FIFA World Cup after beating Portugal 2-1 in the teams’ Group H match at Education City Stadium in Al Rayyan, west of Doha, on Dec. 2, 2022. (Yonhap)

Right after their match, the South Korean players who were asked about the next opponent mostly assumed that it would be Brazil.

The two countries’ most recent meeting came in a friendly match in June in Seoul, where Brazil prevailed 5-1.

“Even though we conceded a lot of goals then, we played the style of football we wanted to play,” Kim said. “I think that experience should help us prepare for the next one.”

Hwang Hee-chan, who scored the dramatic winner over Portugal, went even further.

“Just because we play Brazil, it won’t mean we will be just happy to be there in the knockouts,” Hwang said. “We want to play well and win for our fans.”

South Korea will have a rest day on Saturday, their second day off since the start of their training camp here on Nov. 14. The players also had a break from training on Nov. 20, the opening day of the competition.