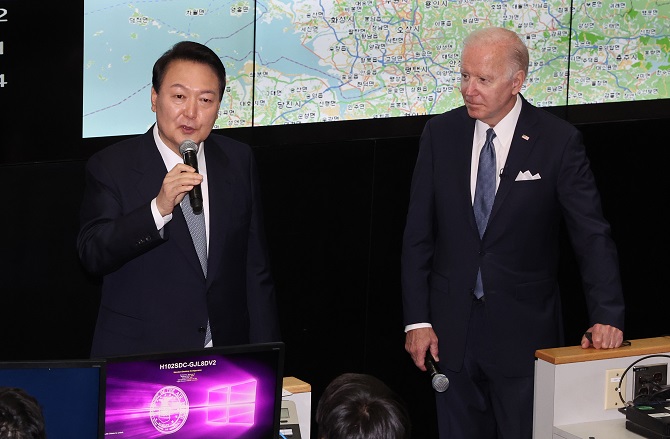 President Yoon Suk-yeol and U.S. President Joe Biden meet with South Korean and American troops at the Korean Air and Space Operations Center at Osan Air Base in Pyeongtaek, 70 kilometers south of Seoul, on May 22, 2022. (Yonhap)

The two visited the Korean Air and Space Operations Center (KAOC), which is situated in an underground bunker and serves as a key command post for air and space operations at Osan Air Base in Pyeongtaek, 70 kilometers south of Seoul.

Yoon described the center as a symbol of the South Korea-U.S. alliance and a key site where the two countries jointly respond to “continually advancing nuclear and missile threats from North Korea.”

“My meeting with you and visiting this unit together with President Biden symbolizes the strong security alliance between South Korea and the United States,” he said while standing in the operations room next to Biden and among service members from both sides.

“This Korean Air and Space Operations Center in Osan, in particular, is the center of operation for the so-called three-axis system and its central control body,” he said, referring to the Korea Massive Punishment and Retaliation, an operational plan to incapacitate the North Korean leadership in a major conflict; the Kill Chain pre-emptive strike platform; and the Korea Air and Missile Defense system.

Biden said he and Yoon spent the last three days talking about the importance of their combined defense posture.

“The fact is that on deterring threats and underwriting stability, it’s as vital today, for not only the peninsula but for the world,” he said. 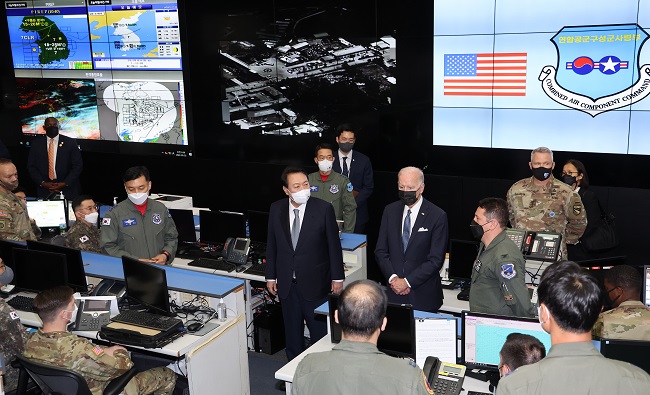 President Yoon Suk-yeol and U.S. President Joe Biden meet with South Korean and American troops at the Korean Air and Space Operations Center at Osan Air Base in Pyeongtaek, 70 kilometers south of Seoul, on May 22, 2022. (Yonhap)

After visiting the operations room together, the two gave each other a thumbs-up and bid farewell, according to the presidential office.

Yoon later met with South Korean service members at the Master Control and Reporting Center, while Biden met with American troops at Osan Air Base.

Biden then departed for Japan on the second leg of his tour to the region.

His first trip to South Korea as president began Friday with a visit to a Samsung Electronics semiconductor plant in Pyeongtaek, which demonstrated the two countries’ commitment to working together to strengthen supply chains.

On Saturday, Yoon and Biden held their first summit and agreed to begin discussions on expanding the scope of combined military exercises, among other things.

That announcement came a day after the company said it would invest $5.54 billion in the construction of a dedicated electric vehicle and car battery manufacturing plant in Savannah, Georgia.