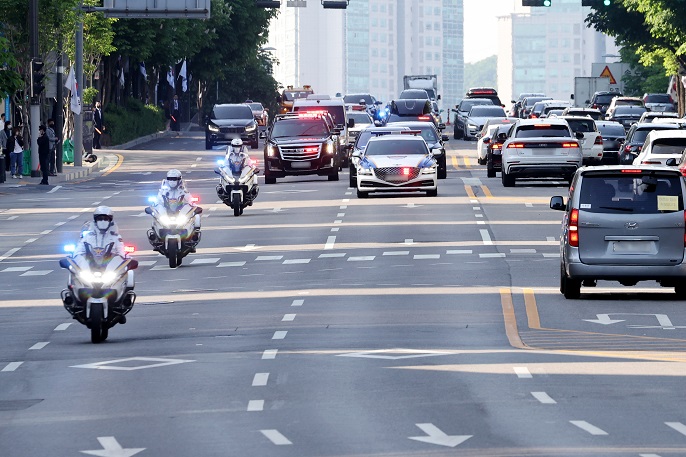 A motorcade carries President Yoon Suk-yeol from his private home in southern Seoul to his office in Yongsan on May 11, 2022. (Yonhap)

SEOUL, May 11 (Korea Bizwire) — President Yoon Suk-yeol made his first commute to work by motorcade Wednesday, an unusual spectacle that followed his relocation of the presidential office.

Yoon left his private home in southern Seoul at 8:21 a.m. and arrived at his office in the central district of Yongsan at 8:34 a.m.

The president will commute everyday for now while the foreign minister’s official residence is being converted into the new presidential residence.

When reporters asked him how he felt about his first commute to work, Yoon smiled, noting his first day at the office was actually Tuesday.

The president did work from his office Tuesday but did so after traveling from his inauguration ceremony at the National Assembly, not from his home.

Asked to share his thoughts on becoming the first president to commute to work, he answered: “Well, I don’t have any special thoughts. I should work.”

Yoon addressed media commentaries that pointed out he did not mention unity in his inauguration speech, saying he left it out because it was obvious.

“Our political process itself is a process of national unity,” he said. “I talked about the values we will pursue in the process of achieving unity. That’s how you should look at it.”

No serious traffic delays and road closures were reported during Yoon’s 13-minute commute as police partially controlled traffic to minimize inconvenience to citizens.

It was only for a few minutes that police stopped all traffic in one direction on the eight-lane road in front of Seoul St. Mary’s Hospital, one of the capital’s busiest roadways.

Police earlier said they have conducted the simulation three times with a focus on minimizing discomfort to the public.

“Barring unforeseen situations, traffic management will be carried out in a similar manner in the future,” said an officer who asked not to be named. “Things went pretty similarly to the simulation.”