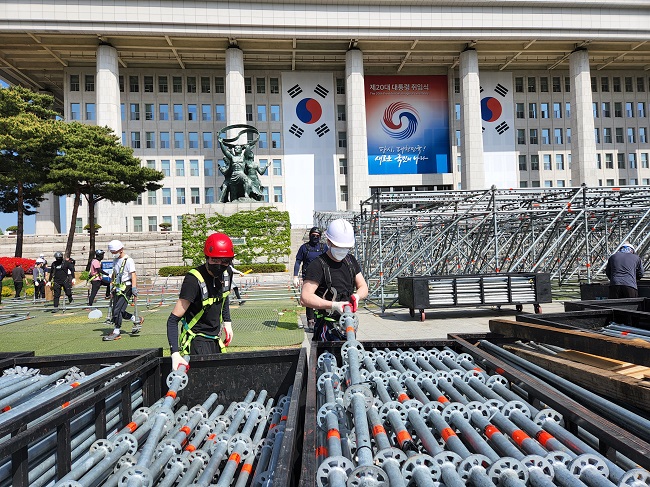 Work to prepare for the inaugural ceremony of President-elect Yoon Suk-yeol is under way in front of the National Assembly in Seoul, in this April 26, 2022, file photo. The event is set for May 10. (Pool photo) (Yonhap)

SEOUL, May 8 (Korea Bizwire) — Incoming President Yoon Suk-yeol will shake hands and take selfies with people at the National Assembly plaza before walking up to the stage to take his oath of office, the chief of the inauguration committee said Sunday.

Yoon will step out of his car as soon as he enters the National Assembly compound Tuesday and walk 180 meters across the plaza, Park Joo-sun said in an interview with Yonhap News Agency, noting past presidents got out of their cars right in front of the stage.

The inauguration ceremony is set to begin at 11 a.m.

“It will be a symbol of harmony between east and west,” Park said, adding that Yoon takes a special interest in children.

Yoon and his wife, Kim Keon-hee, plan to walk up to the stage holding hands with 20 people selected as “representatives of people’s hope,” including John Linton, an American doctor who was granted South Korean citizenship as a “foreign special contributor”; Min Byeong-eon, a Paralympic swimmer; and Lee Jun-su, a young entrepreneur who developed a COVID-19 mask app.

The inauguration speech will last 25 minutes and is set to be finalized Sunday following multiple revisions by Yoon.

“The speech will be about rebuilding the Republic of Korea on the foundation of freedom, human rights, markets, fairness and solidarity,” Park said.

“It will also present the spirit of the times, which calls for becoming a nation respected by the international community as we play a responsible role.” 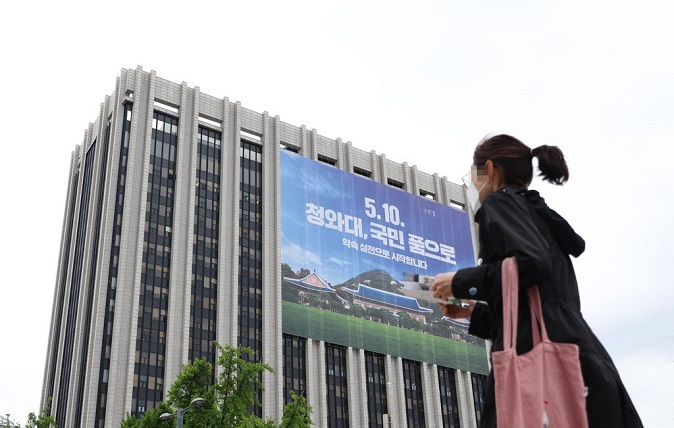 A large banner hangs outside the government complex in Seoul on May 8, 2022, to promote the opening of the current presidential office Cheong Wa Dae to the public on May 10, the inauguration date of incoming President Yoon Suk-yeol. (Yonhap)

Park said Yoon urged the committee to make sure the ceremony features lesser-known stars rather than celebrities and incorporates the theme of the presidential office’s relocation to Yongsan.

Screens will be installed on both sides of the stage to broadcast the opening of Cheong Wa Dae to the public in real time.

After the ceremony, Yoon plans to skip the customary car parade and go straight to his new office in Yongsan and begin work after visiting a nearby senior citizens’ community center and children’s park.

He will then meet with foreign delegations at his office, including U.S. second gentleman Douglas Emhoff, Chinese Vice President Wang Qishan, Singaporean President Halimah Yacob and Central African Republic President Faustin-Archange Touadera, though some have been scheduled for Monday.

In the afternoon, Yoon will attend an inauguration celebration at the National Assembly and host a dinner with leading government and business officials, as well as foreign dignitaries, at Hotel Shilla.

“We’ve designed the inauguration ceremony to be simple and economical, rather than glamorous, and to be held among the people,” Park said.

“We tried to incorporate President-elect Yoon’s philosophy of leading state affairs by cooperating with and serving the people.”