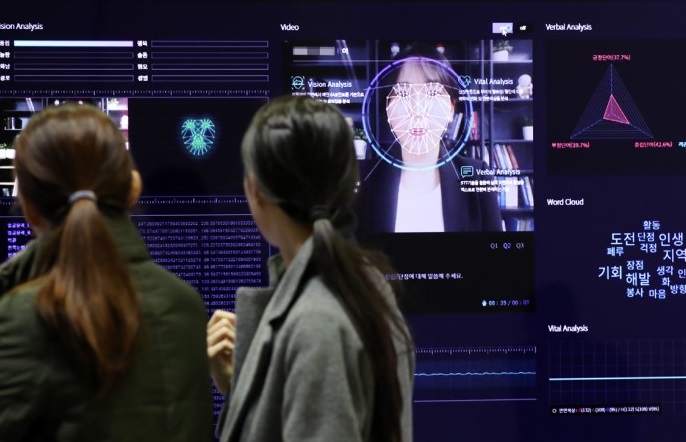 Jobseekers watch an artificial intelligence video analysis solution for the hiring process at the job festival in Seoul. (Yonhap)

SEOUL, May 4 (Korea Bizwire) — Most of South Koreans in their 20s and 30s are worried about possible job reductions resulting from the advent of future industrial society, a major business lobby group said Monday.

The Federation of Korea Industries recently conducted a survey of 829 South Koreans in their 20s and 30s across the country.

At 83 percent, a majority of the respondents said that the advent of future industrial society would lead to job reductions. Among them, 43.4 percent predicted that the scale of job reductions would be significant.

As for the shortcomings of the future industrial society, 36 percent picked job losses resulting from factory automation.

In response to a question asking what types of jobs would be reduced the most in the future industrial society, 65.8 percent selected production-related jobs.

At 30.7 percent, roughly one third of the respondents said that the introduction of a flexible labor market system would help to maintain a sufficient level of employment.

As for the strength of the future industrial society, the largest share of the respondents (40.6 percent) picked ‘improvement in efficiency and convenience.’

In addition, 65.7 percent of the respondents predicted that it would take less than 10 years for the country to usher in a future industrial society where self-driving vehicles and AI would be prevalent.