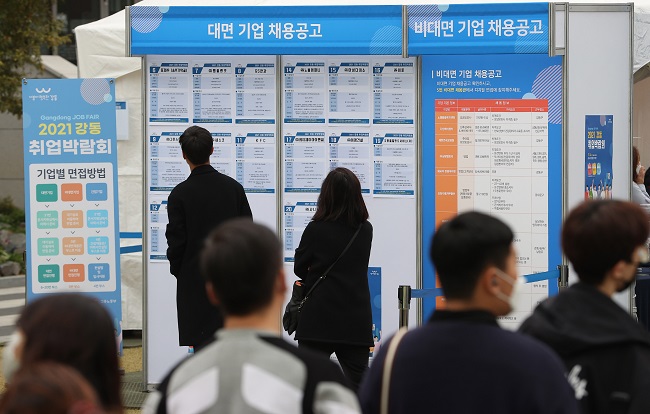 Jobseekers look at an employment information bulletin board at a job fair in eastern Seoul on Nov. 4, 2021. (Yonhap)

The employment rate for Koreans aged 15-34 reached 50.5 percent in January, down from 52.8 percent a year earlier, according to the report by the Statistics Korea Institute.

The corresponding rate for people aged 35-64 came to 71.2 percent in January, down from 73.6 percent the previous year, it showed.

In particular, those who graduated from college or high schools less than a year ago had more difficulty in finding jobs.

Among them, the employment rate for men who graduated from college or university reported a 12.1 percentage point on-year fall in August and September last year when the country was gripped by the second wave of the pandemic.

For women who graduated from high schools less than a year earlier, the employment rate fell 14.4 percentage points on-year in March and April 2020 and 14.9 percentage points in October and November 2020 from the previous year.

For college graduates aged 29 and younger, the proportion of contract jobs that last less than one year reached 47.1 percent in 2021, up from 41.9 percent in 2020, the report showed.

South Korea reported job growth for the eighth straight month in October as the country’s economic recovery has continued despite the fourth round of the pandemic.

The jobless rate fell to 2.8 percent in October, the lowest for any October in eight years.

The unemployment rate for young adults — those aged between 15 and 29 — declined 2.7 percentage points on-year to 5.6 percent.

But many young people still faced difficulty in finding decent jobs as companies refrained from hiring new entrants due to economic uncertainty.