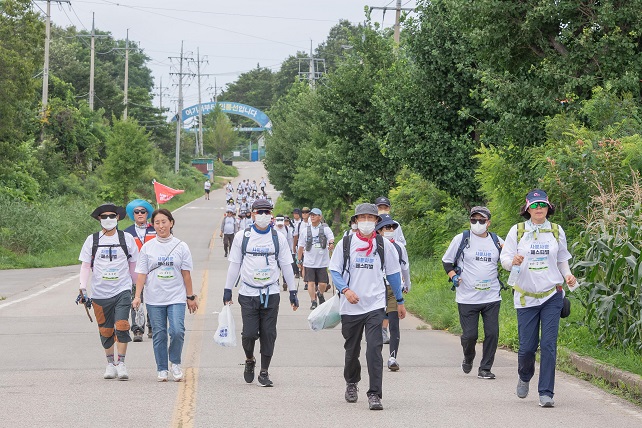 This photo provided by the Goseong County office shows participants in a walking event on the peace-themed DMZ trail in Goseong, Gangwon Province, on July 23, 2022.

SEOUL, Aug. 18 (Korea Bizwire) — All eleven peace-themed hiking trails along the Demilitarized Zone (DMZ) separating the two Koreas will open to the public next month, the government said Thursday.

The trails in Ganghwa, Gimpo, Goyang, Paju, Yeoncheon, Cheorwon, Hwacheon, Yanggu, Inje and Goseong will be available from Sept. 13 to December, according to the Ministry of Culture, Sports and Tourism. Goseong has two different trails.

The DMZ, which is about 250 km long and 4 km wide, is one of the world’s most heavily fortified borders, with the rival Koreas technically in a state of conflict, as the 1950-53 Korean War ended in a truce, not a peace treaty.

Tourists can experience ecological, cultural and historical values of the DMZ while traveling the long routes on foot and by car, the ministry said.

The government opened to the public three hiking routes in Paju, Goseong and Cheorwon on a trial basis in April 2019 but temporarily closed them five months later due to an outbreak of African swine fever and the COVID-19 pandemic.

Five new routes were added in November 2021 but the whole program soon went into closure for the protection of migratory birds and the prevention of the spread of the pandemic. The Yeoncheon and Inje routes were completed this year.

In addition to the 11 routes, the government plans to unveil a 524-kilometer-long trail linking Ganghwa on the west coast with Goseong on the east coast next year.

Online reservations for the walking tours will be available from Aug. 23 on the DMZ Peace Road website run by the Korea Tourism Organization.