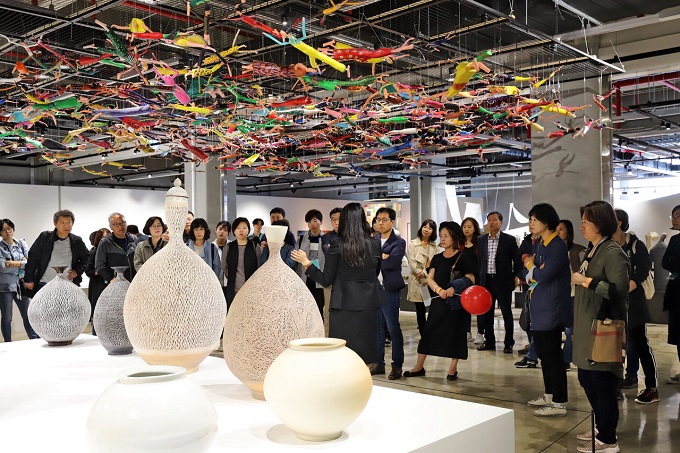 This file photo shows the 11th Cheongju Craft Biennale held in the central South Korean city in the fall of 2019. (Yonhap)

CHEONGJU, July 4 (Korea Bizwire) — The Cheongju Craft Biennale hosted by this central city every other year since 1999 will take place in September next year, its organizer said Saturday.

Under the theme “Tools of Conviviality,” the 12th edition of the festival will be held at the Culture and Art Factory, Osong Station and other exhibition venues across the city from Sept. 9 to Oct. 31, 2021.

The theme takes its name from a 1973 book by Austrian philosopher Ivan Ilyich, who was critical of the age when tools dominate humans and argued that the growth of tools should be limited to restore humanity, according to the organizing committee.

The international craft biennale will consist of main exhibitions, an invited country exhibition, a contest, a fair, an international academic conference, exhibitions connected with local art museums and educational programs, the committee noted.

It said Rheem Mi-sun, a member of the Korea Craft and Cultural Industry Promotion Committee under the Ministry of Culture, Sports and Tourism, will serve as the art director of the 12th edition.

Rheem had previously served as head of the craft division at the Korea Craft & Design Foundation, director of the Korean craft exhibition for the 2018 PyeongChang Winter Olympics and director of the Clayarch Gimhae Museum.

“I will provide an opportunity to ponder the problem of using responsible tools for a ‘symbiotic society’ in which humans, tools and groups form a right relationship,” Rheem was quoted as saying.

“I will also try to promote the future value of the 12th Cheongju Craft Biennale through the broad spectrum of crafts and the power of sustainable tools.”

Cheongju Mayor Han Beum-deuk, who concurrently serves as the chairman of the Cheongju Craft Biennale Organizing Committee, said that all concerted efforts will be made to further solidify the status of the Cheongju biennale as an international festival enjoyed by the whole world despite the challenging situation associated with the coronavirus.

The 11th edition of the festival was held in the fall of 2019 under the theme of “Dreaming of Crafts of the Future” and brought together some 350,000 visitors from in and outside of the country for 41 days.