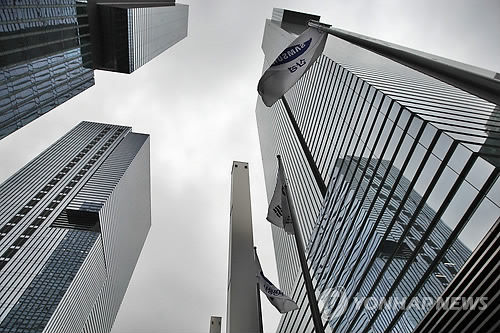 Samsung Electronics suffered the worst earnings in three years in 2014, with its annual net profit tumbling 23.2 percent to 23.4 trillion won from a year earlier. (image: Yonhap)

SEOUL, Apr. 2 (Korea Bizwire) — More than a hundred executives at Samsung Electronics Co., South Korea’s No. 1 tech giant, left their posts between late last year and the first quarter of 2015, data showed Thursday, in what seems to be an aftereffect of the lackluster performance in 2014 smartphone sales.

The number of unregistered executives at the world’s top smartphone and memory chipmaker had stood at 1,219 in the quarter ending in September 2014, according to the company’s half-yearly report filed with the Financial Supervisory Service (FSS), the country’s financial regulator.

The figure, however, fell by 177 to 1,042 as of the end of last month, of which 25 percent, representing 44 C-suite members, were from the firms’ mainstay mobile division, Samsung’s latest business report submitted to the FSS showed.

The number of executives who resigned over the cited period is 70 percent higher compared with a year earlier. In the fourth quarter of 2013, a total of 104 executives vacated their posts.

Market watchers said the weaker earnings, led by a sluggish handset business, may be the cause of a drop in the number of executives at the global smartphone maker.

Samsung Electronics suffered the worst earnings in three years in 2014, with its annual net profit tumbling 23.2 percent to 23.4 trillion won from a year earlier.

In the fourth quarter of last year alone, the profit from the mobile business, Samsung’s cash cow, plunged 64 percent on-year to 1.96 trillion won, as it lost its edge to archrival Apple Inc. in the premium market and up-and-up Chinese players like Xiaomi Inc. in the low-end segment.

Samsung has stepped up efforts to recoup dominance in the global smartphone battle, setting out aggressive marketing at home and abroad for the new Galaxy S6 lineup set to hit shelves April 10.

Local analysts predict Samsung will post a slight on-quarter growth in its first-quarter earnings. Samsung is expected to release the guidance for the January-March result next week.